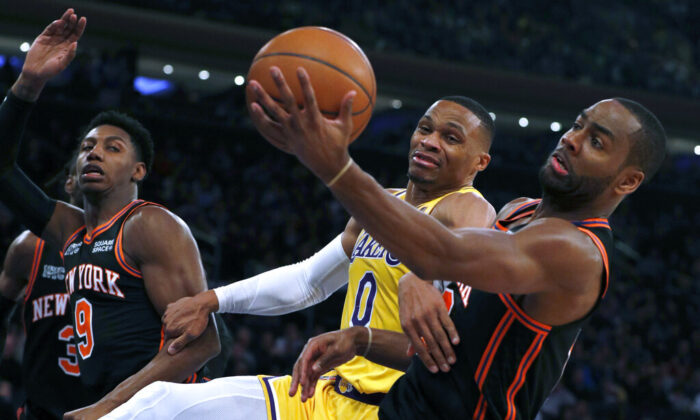 A competitive game seemed unlikely after the L.A. Lakers spotted the N.Y. Knicks 10 points to begin the game, leading to a 25 point deficit midway through the second quarter, at Madison Square Gardens in Manhattan on Tuesday night.

LeBron James was serving a one-game suspension for striking Detroit Pistons center Isaiah Stewart in the face in their match-up on Sunday.

With James absent, Russell Westbrook took charge for the Lakers scoring a team-high 31 points in 37 minutes; his stats include 10–18 from the floor, 3–6 from threes, 13 rebounds, and 10 assists.

Anthony Davis was ill and questionable for the game. He was able to play 34 minutes; scoring 20 points, with 7–17 shooting, 1–2 from three-pointers, six rebounds, and three assists.

“So I definitely think that he was a little bit drained and we used him differently,” Lakers coach Frank Vogel said. “We tried to keep him in seven-minute runs and he did not play in his normal rotation, so it probably had an impact.”

The New York Knicks took advantage of the Lakers slow start a 25 point advantage midway (7:04) through the second quarter.

The Lakers, a team full of veteran players has had difficulty with slow starts, especially in the third quarter.

“No team wants to come out down 10-0, but it’s a long game and we fought back and gave ourselves a chance,” Westbrook said. “We weren’t playing hard enough. Simple.”

The Lakers eventually gained momentum and went on a 16–2 run that cut the lead to 61–51 just before halftime.

The Knicks were led by Evan Fournier with 26 points, on 8–14 shooting from the field, 6–9 from behind the arc, four rebounds, and two assists in 42 minutes of play.

“We can be really good man, we just have to trust how we play and when we have a way to play, just stay with it,” Fournier said.

Randle, a former Laker, was also responsible for much of the offense until being forced to the bench after losing his temper in his fifth foul with 9:18 remaining.

Randle’s absence helped the Lakers to trim the deficit to 90–87 with 8:53 left in the game.

Knicks substitutes however came in to save the day, as Immanuel Quickley played 22 minutes contributing 14 points; 4–9 shooting, 4–8 threes, three rebounds, and three assists.

Obi Toppin scored 12 points in his 22 minutes, shooting 6–11 from the field, grabbing four boards, and also had an assist.

The Lakers had expended too much energy recovering from the 25 point deficit; and missed a handful of three-point attempts in the last 2 minutes, only to get within six points to end the game at 106–100.

The Lakers’ next game is in Indiana on Wednesday.

The Knicks shall host Phoenix on Friday.