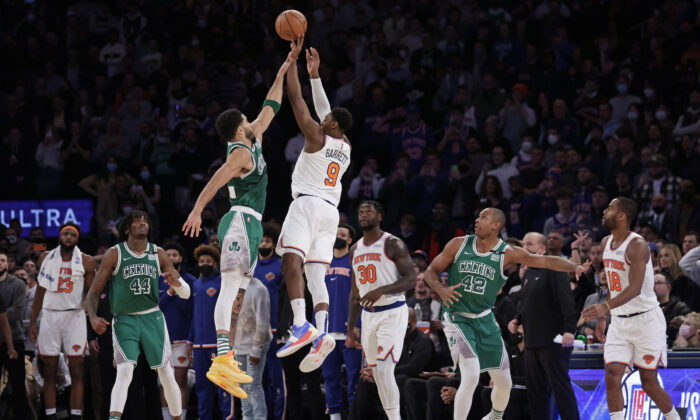 “It was a tough shot, but every time I shoot I think it’s going in,” Barrett said. “Honestly, I didn’t even see it because I fell. I didn’t see it go in, but just by everyone else’s reaction I could tell. So that was cool.”

Evan Fournier led the Knicks with  41 points, 13 in the fourth quarter. He was 15 of 25 shooting, with 10–14 three-pointers. The last seven times a player has scored 40 or more, with 10 threes, was by Stephen Curry. Fournier also had eight rebounds and two assists.

“My guy [Fournier], he always goes crazy against the Celtics,” said Barrett. Fournier brought his average up to 13.5 points and 2.8 rebounds. His performances against his former team have been extraordinary this season scoring 32 points each in the previous two meetings.

“Resilience. It was special for our team,” Randle said. “We kept battling. We obviously didn’t want to get in a hole, but we found a way to win the game.”

Besides the last-second heroics, Barrett totaled 13 points, three rebounds, and six assists. “My teammates have my back. Thank God coach put me in, I was able to make the shot,” said Barrett.

The Celtics have lost six games when leading at the beginning of the fourth quarter, and are 2–11 in close games that end within five points.

“It wasn’t about the last play again. It was everything leading up to it,” Celtics coach Ime Udoka said. “We need some leadership. Somebody that can calm us down and not get rattled when everything starts to go a little south. I think it snowballs between our guys.”

Boston was led by Jason Tatum’s 36 points on 12 of 21 from the field, 6–11 from threes, six rebounds, nine assists, and two steals. Dennis Schroder came off the bench for 20 points, five rebounds, and three assists. Jaylen Brown scored 16 points and had seven rebounds; and Marcus Smart added 14 points, two rebounds, and five assists.

The Celtics went on a 32–11 run in the second quarter to take their largest lead at 57–32 on Schroder’s three-pointer with 3:53 remaining before halftime.

The Knicks retook the momentum with a 24–6 run in the third and fourth quarters as they outscored the Celtics by nine in the third quarter, and 10 in the fourth.

Fournier scored 13 of the Knicks 31 points in the fourth quarter to set up Barrett’s game-winner. Celtics Tatum tied the game at 105 with an 18-foot fade-away jumper with 1.5 seconds remaining. Following the Knicks’ timeout, Barrett received the inbounds from Alec Burks, took a dribble, and banked a 25-foot left-handed fade-away jumper to his right, as Tatum smothered him on defense.

“We have a good win, but it’s a quick turnaround,” said Fournier. We have another game in Boston in two nights.” The two teams will match up again in the back end of their home-and-away series on Saturday.