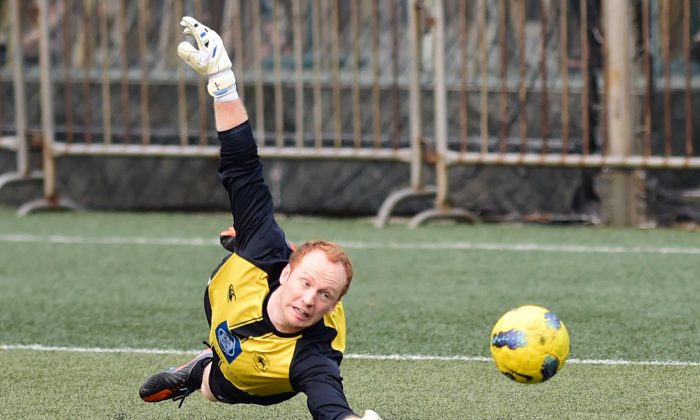 Colts goalkeeper Freddie Toomer just gets enough on this shot to push it wide of the far post, in a recent YYL division one game at Sports road. (Bill Cox/Epoch Times)
HK Football

Sunday (March 29) saw the Premier League’s only game of the weekend, with Kitchee taking on BC Rangers at Kowloon Bay Park, Kitchee eventually claiming a 5-nil victory.

Kitchee took the lead in the 23rd minute when Jorge Tarres finished after Matthew Lam’s shot deflected off of Roberto Fronza, and doubled their lead in the 41st minute through a Matthew Lam strike for a 2-nil half-time lead.

Kitchee extended their lead in the 64th minute through a Xu Deshui free kick from the edge of the box, increased the lead to 4-nil when Daniel Rodriguez scored in the 83rd minute, and then completed the scoring by adding a fifth with a second from Xu Deshui in the 90th minute.

Metro Gallery Sun Source now lead the first division table with 57 points, with HKFC second with 50 points, Yau Tsim Mong third on 45 points, and Southern are fourth on 44 points – the 2 leaders having played 21 games, and the others one less.

The only second division match was a goalless draw between Fire Services and Sai Kung.

Wing Yee now head the second division after 18 matches with 47 points, Mutual are second with 38 points, and Kowloon City are third with 35 points having played one game less.

There were no third division matches.

Tung Sing lead the division with 53 points from 20 matches, with Central & Western district second with 48 points from the same number of matches.

In the third division, HKUSA won 2-1 against CAPS, to move them into third place in the table on 35 points.

IES lead the third division with 48 points from 19 games, with University second with 47 points from the same number of games.

In the fourth division, Skyline were 5-1 victors over Friends of Barclays, Grasshoppers were 4-nil victors over WYFC84, Bapcoll drew 1-all with Youth Coaches, and Standard Chartered won 2-1 against Outward Bound.

HKSS and Power 22 lead the fourth division with 46 points from 19 games, with Grasshoppers third with 44.