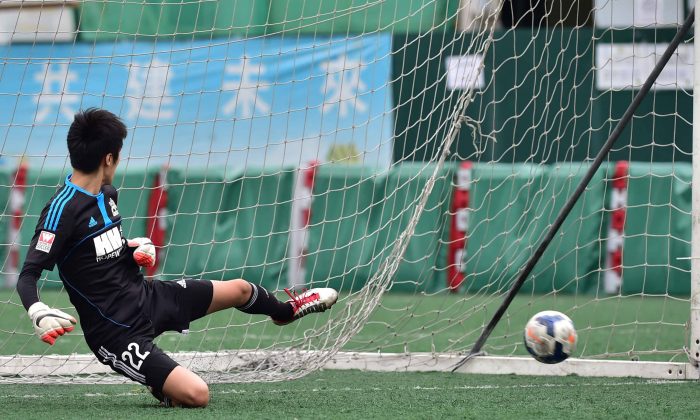 HKFC score to go 1-0 in their 5-2 win against Wan Chai in the HKFA first division match at Valley-6 on Sunday March 1, 2015. (Bill Cox/Epoch Times)
HK Football

Kitchee took the lead in the 26th minute when Xu Deshuai’s cross was finished by Juan Belencoso, a lead that they maintained until the half-time break.

Although Eastern came out for the second half determined to find the equaliser, Kitchee managed to extend their lead in the 55th minute when Belencoso scored from the penalty spot after Eastern goalkeeper Yapp Hung-fai was penalised for a foul on Paulo Careiro.

Jorge Tarres finished in time added on with Kitchee’s fourth goal for a decisive win, which allowed them to leapfrog Eastern into the leading position in the table.

The weekend also saw some FA Cup matches, with Wong Tai Sin prevailing in a 2-nil victory over Southern, and South China gaining a 1-nil win against first division Citizen.

Wing Yee now head the second division after 14 matches with 37 points, Mutual are second with 30 points, Kowloon City are third with 28 points, and Sai Kung fourth with 26 points.

Tung Sing now lead the division with 41 points from 16 matches, with Central & Western district second with 38 points from the same number of matches.

The first division continued its jostling for the lead in the title race with previous leaders Albion held to a 1-all draw by Colts, Wanderers winning 3-1 against Boca Seniors, KCC Dragons 1-nil winners over USRC, GAS winning 3-1 against The Store House Squadron, Swiss XI winning 2-nil against Baker Tilly Spartans, and Corinthians winning 4-3 against French Kiss.

Albion still head the table on goal difference from KCC Dragons, with both sides having 36 points; Wanderers are third with 35 points, and USRC are fourth with 34 points – all having played 17 games.

In the second division, HKDC Mobsters were 4-1 victors over GGFC, ANP drew 2-all with WYFC06, The Store House Hearts won 1-nil against SFALO Oxford, KCC Knights drew 1-all with Antonhill, Azzurri won 5-1 against CSOB, and HKU70’s won 2-1 against Interglobo Colloids.

HKDC Mobsters now lead the table after 17 games with 40 points, with HKU70’s second on 36 points, and The Store House Hearts third with 33 points.

In the third division, Goal Visio were 7-nil victors over Darts, IES won 1-nil against HOB, Dynamo drew 2-all with White Youth, and University won 2-1 against Scorpions.

University lead the table with 44 points from 17 games, with IES second with 42 points form the same number of games.