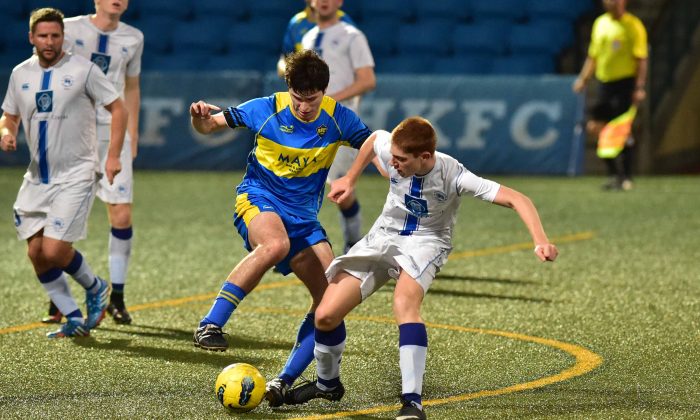 On Saturday (April 18) Wofoo Tai Po recorded their first win of the season with a 3-1 victory over Wong Tai Sin at Tai Po Sports ground. A goal from Chen Jungde after 12 minutes gave Tai Po the lead, was added to by further second half goals from Ye Jia and Joao de Sales, before Wong Tai Sin pulled a goal back through Su Yang in the 77th minute.

In Saturday’s other game at Kowloon Bay Park, Sun Pegasus were 4-1 victors over BC Rangers.
After a scoreless first half, Sun Pegasus took the lead in the 50th minute when Niko Tokic headed in Sham Kwok-keung’s cross, and doubled their lead seven minutes later when Festus Baise fired in after Sham Kwok-keung’s high ball was not cleared. Admir Rascic added a third for Sun Pegasus from the penalty spot in the 71st minute, and Niko Tokic made it 4-nil to Sun Pegasus in the 75th minute when scoring from a pass from Landon Ling. BC Rangers pulled a goal back in the 76th minute when Yago Lopez scored from Ivan Zarandana’s through ball, but Sun Pegasus ran out 4-1 winners.

In Sunday’s other game at Yuen Long Stadium, Kitchee closed in on the inaugural Premier League title with a 3-nil win over I-Sky Yuen Long. Jorge Tarres scored early in the third minute, whilst Juan Belencoso doubled the lead when heading in Jorge Tarres’ cross in the 70th minute, and Juan Belencoso completed the scoring with his second, and Kitchee’s third in the 92nd minute of time added on.

There were no third division matches.
Tung Sing lead the division with 59 points from 22 matches, with Central & Western district second with 51 points from the same number of matches.

In the early game at Sports Road, Neil Shonhard gave Wanderers a first half goal to take them to a 1-nil half-time lead, but a 5 goal haul from Max Brashear saw USRC run out deserved victors.

Albion took the lead against Corinthians, but were pegged back to level before winning the game with a second goal in the second half.

Albion now lead the table with 48 points from 21 games, with KCC Dragons second on 45 points, USRC third on goal difference from GAS with both on 41 points, and Wanderers fifth with 37 points. With one game remaining Albion are almost certain champions, whatever their result in their last game against USRC, due to their 22 goal difference advantage over KCC Dragons.