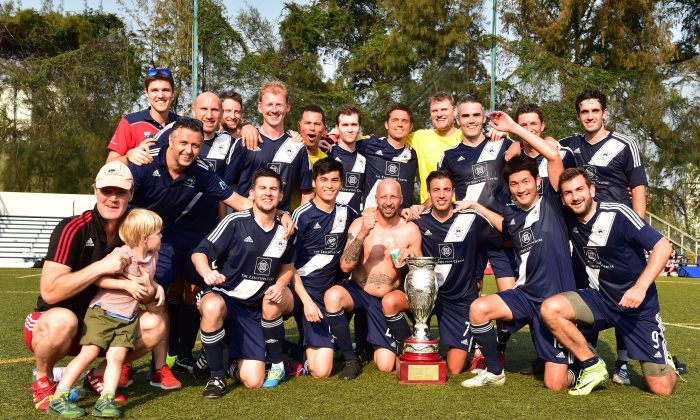 HONG KONG—This week saw the semi-finals of the CODEX HKFA Cup, starting with Saturday’s (Apr 29) game at Mongkok Stadium between Kitchee and Kwoon Chung Southern, Kitchee opened the scoring in the 10th minute, after Matthew Lam’s ball found Jared Lum on the edge of the box, where Lum controlled the ball before firing into the net. Kwoon Chung Southern equalised in the 73rd minute when Wellingsson De Souza headed in Sham Kwok-fai’s cross, but Kitchee immediately struck back in the 75th minute, for what turned out to be the winner, when Tong Kin-man headed in a cross from Matthew Lam.

Sun Hei lead the first division table with 66 points from 24 games with Wong Tai Sin second with 65 points from the same games.

Albion won the first division with 52 points from 20 matches, with Wanderers runners-up with 51 points, and Colts third with 43 points from the season’s games.

In the second division, ANP drew 1-all with WYFC06, Carnegies Boca Seniors were 3-nil winners against White Youth, Azzurri won 3-2 against IES, Dynamo drew 3-all with GGFC, Hearts FC were 2-1 winners against CSOB, and HKU70’s won 1-nil against Grasshoppers.

In the fourth division, Green Cypress FC were beaten 3-1 by Gurkha International, CAPS were 2-1 winners against Skyline, Standard Chartered won 3-nil against Bapcoll, Rising Sun were     4-nil victors over Hung Art, and BOC drew 2-all with WYFC84

Corinthians take the fourth division championship with 47 points from 20 matches, with Green Cypress second with 41 points from the season’s matches.