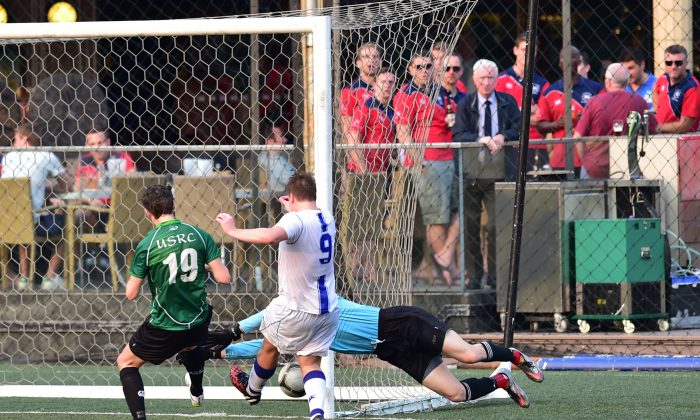 On Saturday (April 25) Kitchee beat YFCMD in a penalty shoot out at Mongkok Stadium after having fought out a scoreless draw after the game went to extra time.

In the early game at Sports Road, HKFC ran out victors after coming back after going a goal down to Lucky Mile in the early minutes. Marc Huff equalised for HKFC in the 23rd minute,
scoring with a header from 6 yards from a right wing cross, and Michael Hampshire scored the winner in the 68th minute with a glorious 25 yard left foot shot from the left corner of the box into the top right hand corner of the net.

After playing 24 matches, Metro Gallery Sun Source now lead the first division table with 63 points, with Southern second with 56 points, HKFC are third with 55 points, and Yau Tsim Mong are fourth on 52 points.

Wing Yee are clear leaders of the second division after 21 matches with 56 points and with one game remaining will be Champions; Mutual are second with 44 points, and Kowloon City are third with 42 points.

Tung Sing lead the division with 62 points from 23 matches, with Central & Western district second with 54 points from the same number of matches.

Albion were crowned Champions after a hard fought contest with USRC was settled though a second half strike from Jan Souleyman. Albion’s celebrations were led by manager Tony Hamilton and captain John Casey, before being presented with the trophy

Albion became champions with 57 points, 3 ahead of KCC Dragons. Already relegated French Kiss were joined by Boca Seniors after their loss to Spartans.

In the second division, HKDC Mobsters won 4-1 against ANP to be champions, Interglobo Colloids were beaten 3-nil by The Store House Hearts, WYFC06 were 3-2 winners against CSOB, KCC Knights were 3-nil victors over Azzurri, Antonhill won 3-1against GGFC, and HKU70’s won 2-1 against SFALO Oxford.

HKDC Mobsters won the division with 50 points from runners up HKU70’s with 48 points. ANP and CSOB are relegated

In third division games, Dynamo won 5-2 against HKUSA, Goal Vision drew 2-all with HOB, University won 4-1 against Yan Po, IES were 4-1 victors over CAPS, and White Youth won 6-2 against Darts.

IES are champions on 57 points, with University runners up on 56 points. Darts and Scorpions are relegated.

In the fourth division, Grasshoppers won 3-nil against HKSS, Outward Bound drew 2-all with Bapcoll, Standard Chartered were beaten 3-1 by Friends of Barclays, Power 22 drew 2-all with Youth Coaches, Skyline were 2-nil victors over Hung Art, and Rising Sun were 5-2 winners against WYFC84.

Grasshoppers are champions with 53 points, and HKSS finished runners up with 52 points.