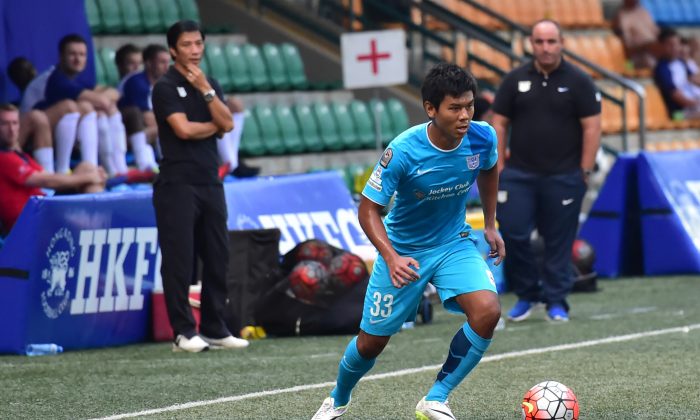 Kitchee’s Sham Kwok-keung scored in stoppage time to give Kitchee a 4-1 win over Kwoon Chung Southern in Group A of the HKFA League Cup on Saturday Dec 19. This photo of Sham is from a friendly game between Kitchee and HKFC on Nov 15, 2015. (Bill Cox/Epoch Times)
HK Football

Saturday’s first game between Kwoon Chung Southern and Kitchee saw the former take the early lead, only for Kitchee to fire back to win the game convincingly. James Ha opened the scoring for Kwoon Chung Southern in the 22nd minute when finishing from Chan Cham-hei’s cross.

However, South China restored their 2 goal advantage in the 39th minute when Andrew Russell scored a powerful header from Lai Yiu-cheong’s cross, and then sealed the 4-1 win with a goal by Lucas Da Silva in the 53rd minute.

With one round of matches remaining, Kitchee top group A with 9-points, having won all 3 games to date and meet fourth placed Dreams Metro as their final opponent. South China are in second place on 6-points but have a ‘winner takes all’ clash with Kwoon Chung Southern to come, but with the latter having to win whilst South China can progress with a draw.