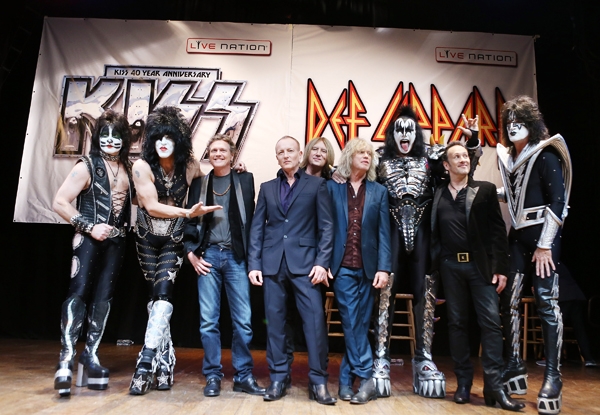 It looks as if we will get to party all night and have our sugar too. Kiss and Def Leppard announced Monday that they will be embarking on a 42-City North American tour this summer.

Both bands were at the House of Blues in Los Angeles where their press conference was streamed via Live Nation. According to Kiss guitarist Paul Stanley, this tour will being “good news and excitement.”

This once in a lifetime tour has been in the works for a while as Def Leppard singer Joe Elliott talked to Gene Simmons two years ago while being part of the Rock-And-Roll All Stars Tour about the possibility of both bands playing together.

“It’s finally happened, which is fantastic,” Elliott said in an interview with USA Today while Stanley calls it a “natural fit.”

A dollar from each ticket sold on this tour will go to the Wounded Warrior Project among other military non-profits. According to Simmons, “Politicians fart through their mouth,” and added that “Only the military makes freedom possible.”

The Kiss/Def Leppard tour will kick off in West Valley City Utah at USANA Amphitheater on June 23 and finish off on August 31 in Woodlands, Texas at the Cynthia Woods Mitchell Pavilion.

They will make a pit stop at Nikon at Jones Beach Theater in Wantagh, New York on August 6 and at PNC Bank Arts Center in Holmdel, New Jersey on July 26. Tickets for all dates will go on sale on March 21 or March 22 depending on the venue.