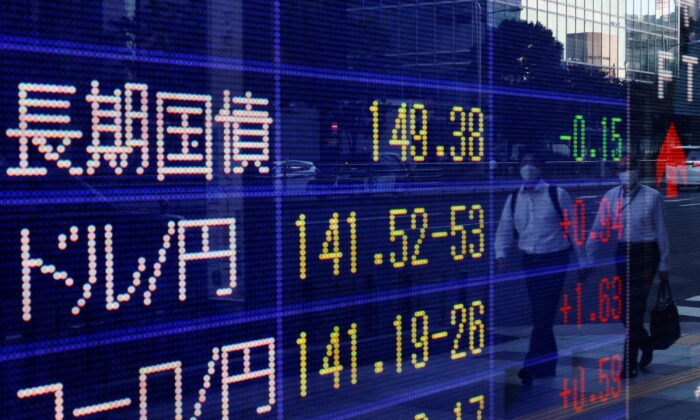 Pedestrians are reflected on a board displaying the Japanese yen exchange rate against the U.S. dollar and euro, outside a brokerage in Tokyo, Japan, on Sept. 6, 2022. (Kim Kyung-Hoon/Reuters)
Markets

King Dollar Stomps on Yen as US Yields Rise

TOKYO/LONDON—The dollar was lord of all it surveyed on Wednesday, at a fresh 24-year peak on the yen and retesting a 20-year high on the euro after U.S. economic data reinforced the view that the Federal Reserve would maintain aggressive policy tightening.

The dollar soared as high as 144.38 yen in Asia trade, hitting the level for the first time since August 1998, while the euro wallowed below 99 cents after dipping as low as $0.9864 overnight, its lowest since late 2002.

This caused the U.S. dollar index, which measures the greenback against six major peers, to hit a fresh 20-year high of 110.69 early on Wednesday.

The European Central Bank is seen as more likely than not to deliver a massive 75 bps rate hike on Thursday, but these expectations are doing little to support the currency in the face of a battered European economy and Russia’s decision to keep the key Nord Stream 1 gas pipeline shut indefinitely.

In contrast, a report overnight showed the U.S. services industry unexpectedly picked up last month, supporting the view that the economy is not in recession and giving the Fed leeway for another 75-basis-point rate rise on Sept. 21.

But the moves were most dramatic for the yen, whose tumble, even by its own recent standards, has been precipitous. The dollar has climbed 3.7 percent from 138.96 yen just since the end of August.

Japan’s currency is extremely sensitive to moves in long-term U.S. interest rates, and the yield on the 10-year Treasury note climbed as high as 3.365 percent in Tokyo trading, a level not seen since June 16.

“The speed at which the dollar is appreciating against the yen is getting out of control and is at risk of becoming unanchored,” said Davis Hall, head of capital markets at Indosuez Wealth Management Asia.

“Right now you’re drawing in everybody to stop out by throwing in the towel,” he said. “We could reach 148 without (Ministry of Finance) action.”

However, many analysts see intervention as difficult.

“Currency intervention or policy revisions by the Bank of Japan are likely to be difficult, and it will not be easy to stop the yen from falling.”

Sterling fell 0.17 percent to $1.1497, approaching the 2 1/2-year low of $1.1444 reached on Monday, with Britain also entangled in the energy crisis, despite new prime minister Liz Truss’s plans for a massive support package.

Back in Asia, many currencies were trading at or around multi-year lows. China’s yuan sank to a two-year trough, closing in on the 7-per-dollar mark despite steps by authorities to stem its decline.

The onshore yuan weakened to a low of 6.9808, the softest level since August 2020, and the offshore yuan was even closer to the key level, falling as low as 6.9949 per dollar.

Cryptocurrency bitcoin slumped to the lowest since June 19 at $18,540, extending a 5 percent tumble from Tuesday. The overall crypto market capitalization dropped below $1 trillion once again, having been as high as nearly $3 trillion in late 2021.

By Kevin Buckland and Alun John