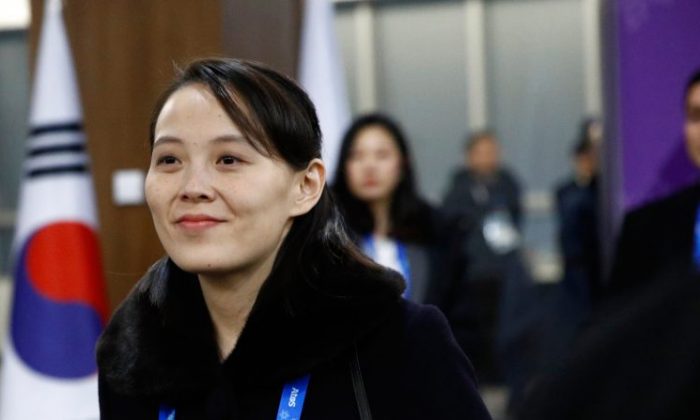 The sister of North Korean communist dictator Kim Jong Un is pregnant with her second child, according to her statements to Seoul officials during the Pyeongchang Winter Olympics.

According to The Korea Herald, Kim Yo Jong told officials that she felt some discomfort during her three-day visit and that she was pregnant.

Kim Yo Jong is rumored to have given birth to her first child in 2015, though no photographs of the baby ever emerged, Fox News reported. None of Kim Jong Un’s children has ever been seen in public either, although his wife is believed to have had several.

Kim Yo Jong is Kim Jong Un’s favorite sister, and has stayed out of the public spotlight until last year. Earlier this month, she became the first member of the Kim family to visit South Korea since the Korean War ended in 1953.

During her three-day visit, Kim Yo Jong attended the opening ceremony and watched South Korean and North Korean athletes march under the unification flag. She also met with South Korean President Moon Jae-in.

The South Korean president credited President Donald Trump for bringing about the landmark talks which led the North Koreans to agree to send a delegation to the Olympics.

Since the birth dates of the ruling family are a tightly kept secret, it is unclear how old Kim Yo Jong is, though it is rumored that she’s 30, four years younger than her brother.

Kim Yo Jong’s official title is Deputy Director of the Propaganda and Agitation Department of the Workers’ Party of Korea. Her goal is to maintain Kim Jong Un’s image as an idol to the North Korean people.

The United States has sanctioned Kim Yo Jong in connection with “serious human rights abuses and censorship.”

Kim Yo Jong is one of the select members of the elite in North Korea who enjoys a lavish lifestyle while the vast majority of the populace lives in abject poverty.

North Korea, with its vast network of labor camps spread across the nation where hundreds of thousands of people are feared to have perished, is a textbook case of late-stage communism.