News of Kim’s acceptance came shortly after his historic meeting with Trump in Singapore. The two leaders signed a joint statement committing to work toward peace on the Korean Peninsula. Kim agreed to abandon nuclear weapons.

Outside the signed statement, Trump agreed to stop war exercises with South Korea and Kim promised to destroy a major missile-testing site.

“I think it’s really going to be something that will be very important,” Trump said. “And he has accepted. I said, at the appropriate time. We want to go a little bit further down the road.”

The Singapore summit was the first official meeting between a sitting American president and a North Korean leader. The joint statement described the encounter as “an epochal event of great significance.”

Kim’s visit to the White House would be another historic first. No North Korean leader had officially visited the United States since the regime was founded as the result of an armistice more than 70 years ago.

Top officials from the United States and North Korea traded visits in the lead-up to the summit. Secretary of State Mike Pompeo visited Pyongyang twice and met with Kim in person. Kim’s top deputy, Kim Yong Chol, visited New York City and Washington and met with Trump in person.

The meetings culminated in the historic summit. Trump was optimistic about the outcome in a series of tweets during his 24-hour flight back to the United States.

“There is no longer a Nuclear Threat from North Korea,” Trump wrote. “Meeting with Kim Jong Un was an interesting and very positive experience. North Korea has great potential for the future!”

Just landed – a long trip, but everybody can now feel much safer than the day I took office. There is no longer a Nuclear Threat from North Korea. Meeting with Kim Jong Un was an interesting and very positive experience. North Korea has great potential for the future!

“The World has taken a big step back from potential Nuclear catastrophe!” the president continued. “No more rocket launches, nuclear testing or research! The hostages are back home with their families.”

The World has taken a big step back from potential Nuclear catastrophe! No more rocket launches, nuclear testing or research! The hostages are back home with their families. Thank you to Chairman Kim, our day together was historic!

Before Kim Yong Chol’s June 1 visit to the White House, the only other North Korean official to visit America’s presidential residence was Jo Myong Rok, a top military official. Jo met with President Bill Clinton at the White House in 2000.

Trump said that he plans to visit Pyongyang, though he indicated that the timing is still uncertain.

“Well, at a certain time, I will,” Trump said when asked about the visit. “I said that will be a day that I look very much forward to, at the appropriate time.”

Trump described his meeting with Kim as “honest, direct, and productive.” The United States is seeking complete, irreversible, and verifiable denuclearization of North Korea. The joint statement signed by the two leaders did not detail how the goals would be achieved, but Trump told reporters after the summit that he discussed verification with Kim. Subsequent meetings between the two leaders may serve as opportunities to solidify a more detailed agreement.

“As we do that, we’re going to have a lot of people there, and we’re going to be working with them on a lot of other things,” Trump said. “But this is complete denuclearization of North Korea, and it will be verified.”

North Korea state-run media reported that Trump and Kim overcame a “past that gripped their ankles and prejudice and wrong practice covered their eyes and ears” to finally meet. 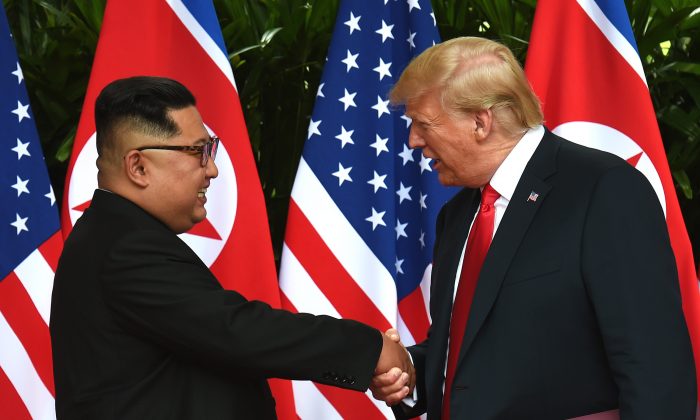