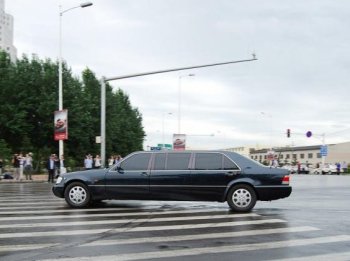 On Friday morning, some 30 vehicles carried the authoritarian leader from his hotel to a train station in Jilin province, where he would board on an armored train heading to the industrial city of Changchun.

Kim arrived at the northeastern province of Jilin on Thursday. He visited Yuwen Middle School, where his father, founder of North Korea’s communist regime, attended for two and a half years in the 1930s.

Kim might have met Chinese leader Hu Jintao, according to South Korean news agency Yonhap News, but neither news agencies in China nor North Korea released any official confirmation.

Kim’s sudden visit to China coincides with former U.S. President Jimmy Carter’s visit to North Korea to retrieve jailed American Aijalon Gomes, who was jailed in North Korea since January for illegally entering the country. Kim’s leaving has stirred up a speculation that he turned his back to Carter.

The public had expected that Kim, who personally spoke with former President Clinton a year ago on the release of two previously jailed American journalists, would also meet Carter.

After a talk between the former president and North Korea’s No. 2 Kim Yong Nam, North Korea granted the release of Gomes, according to the Carter Center and the Korean Central News Agency of DPRK.