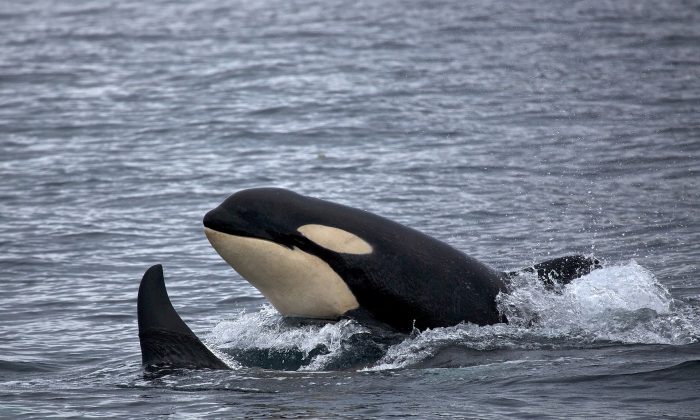 Scientists have taught a killer whale to imitate human speech, in a new study released on Jan. 31.

Research published in the journal Proceedings of the Royal Society B, revealed that an orca was able to mimic words, including “hello,” “bye bye,” and “one-two.”

Scientists studied a 14-year-old killer whale named Wilkie who had previously been trained in another study to copy actions of other orcas.

The study also found that Wilkie was able to imitate unfamiliar sounds from other orcas, including the sound of blowing raspberries.

“We wanted to see how flexible a killer whale can be in copying sounds,” Josep Call, professor in evolutionary origins of mind at the University of St Andrews and a co-author of the study, told The Guardian.

“We thought what would be really convincing is to present them with something that is not in their repertoire – and in this case ‘hello’ [is] not what a killer whale would say,” Call said.

Wilkie’s sounds were analyzed first, by human judges, and then using computer analysis. Results showed that Wilkie made “recognizable copies” of the sounds, both human and orca, relatively quickly. In two instances, Wilkie was able to mimic the human sound on the first attempt.

“Killer whales use their blowhole to make noises, almost like speaking out of your nose, so we were not expecting it to be perfect,” Dr Jose Abramson, a researcher at the Complutense University of Madrid, who led the study, told The Independent.

“But we were surprised by how close it was,” he said.

In the trial, Wilkie was first trained to copy three familiar sounds made by her three-year-old calf Moana. She was then exposed to five different orca sounds that were unfamiliar to her.

While sound imitation is widespread in bird species, scientists say it is rare among mammals. However, cetaceans – the mammal group that includes whales and dolphins – are known for their ability to learn different sounds. Bottlenose dolphins and beluga whales have been captured producing noises they are exposed to.

In the wild, it has been found that different killer whale pods use unique vocal dialects. Scientists believe that these findings lend support to the theory that these dialects are a result of imitation between orcas.

“I think here we have the first evidence that killer whales may be learning sounds by vocal imitation, and this is something that could be the basis of the dialects we observe in the wild – it is plausible,” Call told The Guardian. However, he noted to further test the idea, trials would have to be conducted with wild orcas.