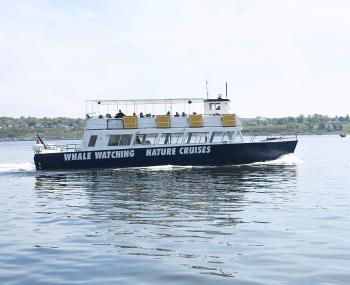 THREATENED BY POLLUTION: Engine exhaust from boats may be having significant adverse health effects on endangered killer whales off the West Coast of Canada and the U.S., according to a new study.
US

Engine exhaust from boats may be having significant adverse health effects on endangered killer whales off the West Coast, a Canadian zoologist has found.

A two-and-a-half year study by Cara Lachmuth suggests that the orcas may be struggling with carbon monoxide emissions five times higher than those found 100 meters (328 feet) from Los Angeles freeways.

Lachmuth used computer modeling and mathematical equations to recreate various scenarios of exposure to pollutants. She then proportionately compared acceptable levels of toxins on humans to whale populations.

“There are different concentrations of pollutants under a wide variety of scenarios that I was able to recreate, and then I used those concentrations to figure out health-wise what that means to a killer whale,” said Lachmuth, of the University of British Columbia’s Department of Zoology.

She found that when cold ocean surface temperatures meet warm air, an inversion layer is created that prevents vertical airflow. This means the air can only move horizontally and keeps the pollutants close to the surface, accumulating right where the whales are breathing.

“If they’re inhaling these gases, it’s giving them immune problems and all kinds of other health problems that might be pushing them over the edge,” she said.

The study highlights the need for tighter regulations on boat activity close to whale-frequented areas. Lachmuth said the current required 100-meter (328 feet) minimum distance may not always be adequate, especially if the boats are upwind from the whales, or there are too many boats congregated in one area.

“My suggestion is maybe we need to increase the distance that the [boats] are allowed to get to the whales, or limit the number of boats, because right now it’s kind of a free-for-all,” she said.

Lance Barrett-Lennard, a marine mammal research scientist at the Vancouver Aquarium and Lachmuth’s research supervisor, said the study will hopefully bring more awareness of the long-term detrimental effects exhaust emissions have on whales.

“This [whale] population near Victoria and southern [British Columbia] is followed 12 hours per day all summer by whale watchers, so they’re breathing exhaust gases constantly. It wouldn’t be as big a problem if that weren’t the case,” he said.

“There’s definitely less compliance by recreational boats than there is by commercial boats,” he said.

Exhaust emissions add to the many challenges faced by southern resident killer whales that have been spotted as far south as central California and as far north as Canada’s Queen Charlotte Islands, which lie midway between Alaska and Washington state.

“The killer whales are getting multiple insults,” Barrett-Lennard said.

Noise disturbance from boats is known to disrupt whales’ mating and socialization processes, and they are also suffering from lack of food due to salmon shortages, the whales’ main food supply. In addition, exposure to toxic chemicals and organic chlorines from industrial sources is also stressing the mammals.

Biologist and conservationist David Hancock, who has studied West Coast wildlife for over 40 years, said orcas are now so contaminated with toxins that the only way to safely dispose of their bodies after death is to incinerate them.

“Every time one dies and washes up on the shore, it is so contaminated with pesticides and heavy metals that the government, after they’ve analyzed it, can’t tow it out to sea. There’s so much poison in that dead animal, you can’t put that much poison in the ocean,” he said.

Killer whales were captured on a large scale in the 1960s and ’70s and put into aquariums, which quickly depleted their numbers. Hancock says the largest population he remembers was about 300, but today there are only 87 killer whales left in the southern gulf between Seattle and Vancouver.

“A single catastrophic event could take the whole population out. The overall conservation prognosis would certainly be better if the numbers were even double what they are now.”

He added that killer whales are at the top of the food chain, making their condition a good determinant of the health of the overall eco-system.

“Killer whales are the sentinels of the eco-system. If our top predators are doing well it generally speaks to the health of everything below them. And we definitely have a problem with our top predators,” he said.