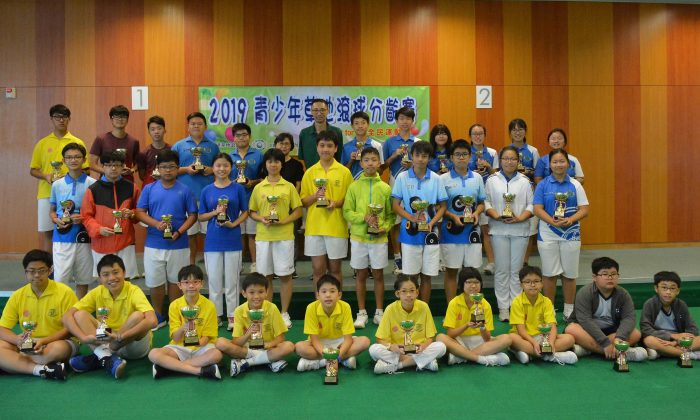 A total of 82 youngsters participated in the U25 Age Group Lawn Bowls Competition last Sunday, July 21. (Stephanie Worth)
International

The event was held at the indoor greens of Yuen Chau Kok Sports Center in Shatin.  It was played in a three woods pairs format with no limitation on the combination of gender in each team.  The participants were divided into four groups according to their age, from the youngest group of 8-11 to the most senior group of 18-25 years old.

In the youngest group, 10-years-old Arnold Leung partnered with 11-years-old Jovi Ma to win their first ever title.

They played Chloe Chan and Quenton Ip in the final and needed to fight until the extra end to win the game 11:10.

Leung, a primary 4 student with the HKCCCU Logos Academy and a member of the Hong Kong Youth Development Team (HKYDT), said that he was a bit nervous at the final because he was desperate to win it, “It gave me some unnecessary pressure and affected my performance. Fortunately I have a good teammate and it was our teamwork that won us the title.”

His teammate Ma, a Po Leung Kuk Lam Man Chan English Primary School student who attached to the Young Athletes Scheme, said that he had confidence from the start, “I believed that if we work hard and play as a team, we can be the champion.”

They are now aiming at becoming the first players to win all four age groups, which has not been done since the launch of the competition back in 2012.

The most senior group, 18-25 was between four HKYDT members.  Chan Ka Yue and Michael Cheung, who were both playing as substitutes, also needed the extra end to over-power Lyndon Sham and Kenneth Yiu 13:12.

As both players have been training together with the HKYDT for many years, they know each other well and the final really depends on the consistency, according to Cheung.  “We managed the green better and did not lose any big count so we won the game.”

This was Sham’s fourth runners-up in the competition, after achieved the last three at the 15-17 age group.  He also won a champion in the 12-14 age group.

In the 12-14 age group, Evans Yuen and Anson Chow defeated Gillian Ng and Corrine Chan in the final to win their first title.  This is also Gillian’s second runners-up title after she lost in the final of the 8-11 age group last year.