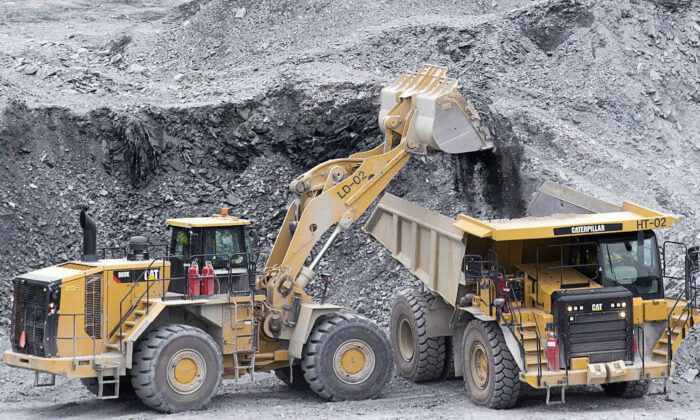 An excavator works at Atlantic Gold Corporation's Touquoy open pit gold mine in Nova Scotia in a file photo. Mining is not one of the industries the government is looking to boost; however, Canada has signed up to assist the United States in creating a supply chain for critical minerals that include rare earths. (The Canadian Press/Andrew Vaughan)
Companies

A significant payoff could be on the table for Canada’s economy if it can kickstart its beleaguered rare earth elements (REEs) mining industry. The problem is that it’s not one of the government’s priorities, such as green energy, despite the fact that the sector needs federal support to dent China’s monopoly and eventually invite private sector investment. Recent regulatory actions further dampen the industry’s prospects.

The United States is seeking a reliable partner to break China’s stranglehold on REEs. Canada has shown it can be just that—it supplies the United States with a quarter of its uranium needs and has been a trustworthy counterparty for over 75 years. Despite Canada having about 40–50 percent of the world’s known rare earth reserves, it is not currently producing any REEs.

The Canada-U.S. Joint Action Plan on Critical Minerals Collaboration was finalized Jan. 9, and in the coming weeks experts from both countries will be meeting to discuss production and mineral security concerns.

Critical minerals include nickel, copper, uranium, zinc, and cobalt, while the rare earths are distinct group of 17 elements with similar properties. The production of batteries is a growing source of demand for these metals as electric/hybrid vehicles and electronics become ubiquitous.

What can a government do if it is decided that an industry needs to make a quantum leap forward? The only viable solutions are providing subsidies and tax advantages, says Carleton University business professor Ian Lee.

“That’s exactly what we’re doing with solar panels and wind,” he said, adding that the “green industry” is the best example of what the government is doing if it wants an industry to take off.

Pierre Gratton, president and CEO of the Mining Association of Canada, also suggested in an interview with BNN Bloomberg that the government could invest directly in some mining operators; however, governments in Western advanced economies have moved away from ownership stakes in the means of production over the last few decades.

Government funding for mining has been relatively meagre in recent years, but it is plentiful for anything “green.”

In the federal government’s first budget in 2016, more than $1 billion over 4 years was promised for clean tech, which included forestry, fisheries, energy, agriculture, and mining. However, a government database tracking “Invest in Canada” funding showed no discernible funding allocated to mining.

Budget 2018 extending a 15 percent tax credit for one more year to support junior mining companies’ exploration work is about all that’s been done. Budget 2017 stated that in recent years, Canada has phased out a number of tax breaks for oil, gas, and coal mining.

With the government putting a priority on clean energy and certain agricultural sectors where it feels the country has a comparative advantage and thus assistance is warranted, if it also makes mining a focus the competing ideal of environmental responsibility will act as an albatross around its neck.

“The government in Canada is holding a position that is fairly hostile to mining development,” Lee said. “This is a good example of government working at cross purposes with itself.”

“It’s been very difficult for explorers to raise funds to go explore for rare earth projects and to develop them,” said Gratton. “It’s not subject to natural market conditions.”

The reason is that China has monopolized the supply chain for REEs and is less concerned about losing money than about securing long-term supply, says Gratton. This is common operating procedure for China’s state-owned enterprises.

“In our view, the reason that China has a lock on the market is not because of the supply in the ground. It’s because of the processing capability,” said Tracy Moore, CEO of Canada Rare Earth, a company that acts as a value-added middleman. It sources rare earth concentrate from existing sources and sells to refineries, which could be built in Canada but currently are elsewhere.

A few decades ago, when China took on the responsibility of processing rare earth concentrate, refining virtually shut down elsewhere.

“The Chinese, particularly at that time, were turning a blind eye to environmental issues of processing,” Moore said. Eventually China began also mining REEs within its borders.

Has Not Been a Priority

“While we are great believers of free-market principles, in view of the poor capital market conditions for Canada’s junior resource sector, we respectfully ask how Canadian rare earth developers are to compete unsupported in a market dominated by a powerful sovereign nation pursuing a calculated strategy and where other governments are spending vast sums on rapid development of rare earth deposits to support their national interests,” said Al Shefsky, president, Pele Mountain Resources Inc., in the report.

Shefsky said back then that Canada could create its own REEs supply chain and generate billions in economic activity and thousands of well-paying jobs.

Moore says the more important factor is providing the capability to enhance and separate the REEs.

“If you mine stuff in Canada, the concentrate would have to go to China for processing,” he said. Therefore, it’s not about mining, but about having a viable outlet for the concentrate to be refined.

“If the government is going to get involved, I think it should be at the refining/enhancement level which will help pull through the best of the breed of the mining opportunities,” Moore added.

China’s de-facto monopoly in REEs is a thorn in the side of the U.S. military. It’s U.S. national security concerns—such as the need for these key minerals to be used in making components for fighter jets and other important electronics—rather than classical monopolistic behaviour from China that is spurring the initial steps toward the dismantling of the monopoly.

Nevertheless, historically, monopolies have never lasted for a long time. Economic theory says they tend to kill themselves. If the monopolist tries to raise prices too much, the incentives for others to develop an alternative become too tantalizing.

The United States and its allies have made it clear that their dependence on China for rare earths needs an alternative. So the seeds of destruction to China’s REEs monopoly are being sewn.

Gratton is enthusiastic about the broader collaboration between the United States and Canada on critical minerals.

“I think it’s just great … really good for our two countries,” he said.

“Canada is an important supplier of 13 of the 35 minerals that the United States has identified as critical to economic and national security,” according to the Natural Resources Canada press release on Jan. 9.

“We have the potential to become a reliable source of other critical minerals, including rare earth elements.”