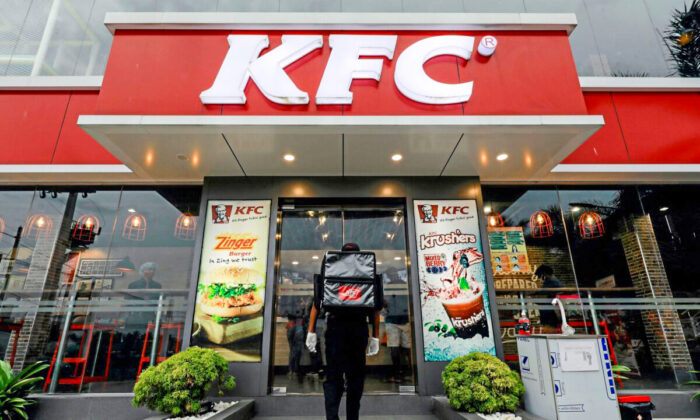 A delivery staff member wearing a protective mask enters a KFC fast food outlet after a delivery, amid concerns about the spread of the coronavirus disease (COVID-19), in Colombo, Sri Lanka on July 9, 2020. (Dinuka Liyanawatt/Reuters)
US News

KFC will begin rolling out its Beyond Meat fried “chicken” across the United States next Monday for a limited time, the companies announced on Jan. 4.

The meatless meal will be the first plant-based chicken to launch in fast-food restaurants across America and will be available at KFCs nationwide.

Shaped like fried chicken chunks, the six-piece packs will be available to consumers at a starting price of $6.99 as part of a combo meal that includes a medium drink and fries, although that may vary depending on location.

It comes following nearly two years of trials of the meatless fried “chicken” across test markets in select U.S. cities including Los Angeles, Charlotte, North Carolina, and Nashville, Tennessee. KFC first tested Beyond Fried Chicken at an Atlanta-area restaurant in 2019.

“It’s time,” said KFC U.S. President Kevin Hochman in an interview with CNN Business, adding that the new product is for customers “that want to eat a little less animal-based protein, but that haven’t become vegan or vegetarian.”

Beyond Meat announced a global strategic partnership with Yum! Brands, which operates KFC, last year in an effort to create and offer “craveable and innovative plant-based protein menu items” across KFC, Pizza Hut, and Taco Bell over the next several years.”

“The taste is so good that they might choose it over regular fried chicken,” Hochman said.

KFC noted that the COVID-19 pandemic had delayed the release of the latest meatless chicken dish, not due to supply chain issues such as sourcing ingredients but due to updates to KFC’s operations in the early days of the virus outbreak.

The latest meatless chicken rollout comes amid growing demand among consumers for more plant-based food options in an industry reportedly worth $4.3 billion in 2020.

In an interview with Bloomberg last September, Hochman noted that younger consumers are turning to more plant-based foods, a trend which his company expects to continue.

“A lot of people think plant-based is about vegan or vegetarian. Over 90 percent of people who buy Beyond [Meat] in the grocery store are also eating animal proteins. I eat plant-based hamburgers at home now because I think they’re as good as the regular burger,” Hochman said.