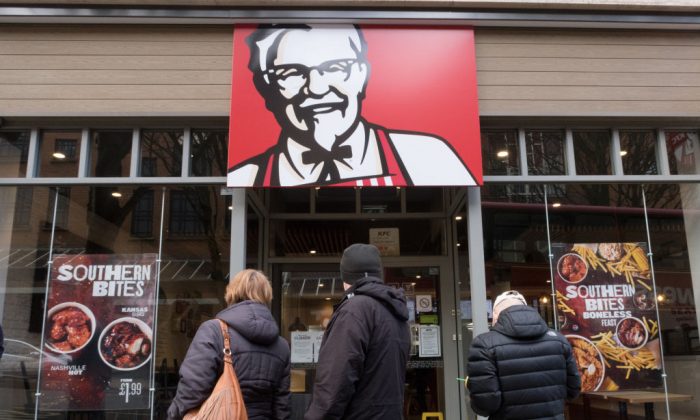 People look into a branch of KFC that is closed due to problems with the delivery of chicken on February 20, 2018 in Bristol, England. (Matt Cardy/Getty Images)
UK

KFC Returning to Former Supplier in UK After Chicken Shortage

LOS ANGELES—Yum Brands Inc’s KFC chain is returning to a former supplier for more than one-third of its UK restaurants after a switch to a new firm caused widespread chicken shortages that forced the temporary closure of hundreds of restaurants.

KFC on Thursday March 8 said it would switch the distribution contract back to Bidvest Logistics, from DHL and partner QSL, for up to 350 restaurants in the north of the UK. It will continue to work with DHL and QSL for the remainder of its roughly 900 restaurants in the UK and Ireland.

“We’ve been working hard to resolve the present situation with QSL and DHL. This decision will ease pressure at DHL’s Rugby depot, to help get our restaurants back to normal as quickly as possible,” KFC said in a statement.

KFC said more than 97 percent of its UK restaurants are open for business, but “there will be some limited menus before we are back to business as usual.”

The crisis in the UK market, which accounted for roughly 3 percent of Yum’s 2017 global system sales, comes as a business turnaround at the fried chicken chain was taking hold.