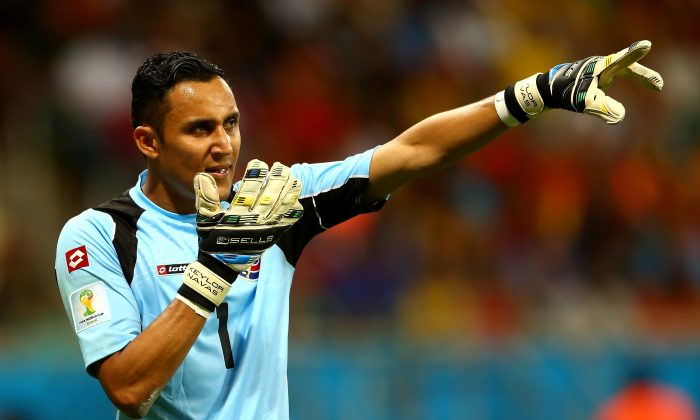 Keylor Navas is Madrid, and not Catalonia, bound.

The 27-year-old Costa Rica international has supposedly reached an agreement with Real Madrid, according to Spanish newspaper Marca.

Marca also reports that Bayern Munich were very nearly signed Navas, but were not willing to meet the Costa Rican’s buy-out clause.

At some stage, Bayern Munich, Atletico Madrid, Porto, Arsenal, Monaco, and PSG were interested in signing Navas, who had an outstanding World Cup 2014.

Navas’s signing will only be announced after Real Madrid secures a deal for current goalie Diego Lopez. Monaco and Napoli are said to be interested in Lopez.

However, Navas himself is not willing to confirm if the deal has been made.

“I hope in the future to be talking differently with all of you and to tell you my situation,” said the 27-year-old to reporters.

“I hope things go well and can be sorted, but so far I have not signed anything with anyone at the moment.

“I’m still waiting – that’s where we are.

“I cannot say my representative is not in negotiations with a team, but these things are not done overnight.

“There are many points at which you have to agree.”