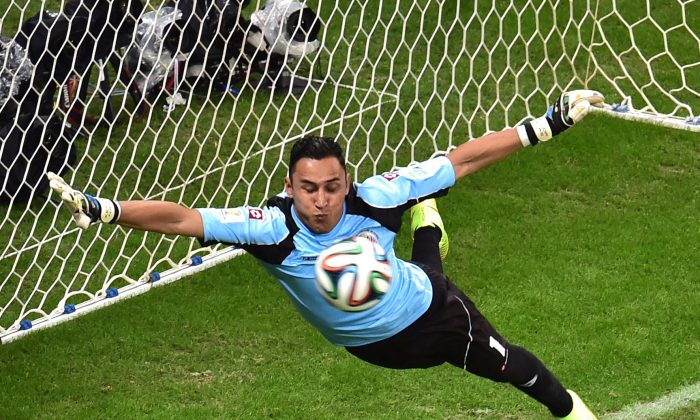 Costa Rica's goalkeeper Keylor Navas jumps to make a save during a quarter-final football match between Netherlands and Costa Rica at the Fonte Nova Arena in Salvador during the 2014 FIFA World Cup on July 5, 2014. (GABRIEL BOUYS/AFP/Getty Images)
Gaming

Keylor Navas had a great World Cup 2014, but how has he performed for his club?

According to FIFA.com, Navas had an incredible 91.3% save rate at the World Cup. Indeed, he kept held Netherlands at bay for 120 minutes in their quarter final match, only to be undone at the penalty shootout stage.

In the EA Sports’ popular soccer simulator, FIFA 14, Navas has a rating of 72 and a growth potential of 6 in Career mode, according to Futhead.com. In the Ultimate Team mode, Navas has a Team of the Season (TOTS) rating of 80, and a Costa Rica World Cup rating of 79.

Not Even Navas Can Rescue Costa Rica This Time

SALVADOR, Brazil (AP) — Not even Keylor Navas could rescue Costa Rica this time.

The goalkeeper who made so many wonderful saves in this World Cup was outclassed in the penalty shootout that decided the quarterfinal against the Netherlands.

But for 120 minutes — and for most of Costa Rica’s previous four matches at the tournament — Navas simply couldn’t be beat.

In the first half alone Saturday, Navas made four saves that helped earn him the man of the match award, even after the Dutch won a shootout 4-3 after a 0-0 draw marked by 120 minutes of Dutch dominance.

In the 29th minute, Navas denied Memphis Depay with his boot.

Ten minutes later his diving, one-handed, effort to swat away a free kick from Wesley Sneijder would have stood as the save of the night if Tim Krul had not stopped two Costa Rica penalties in the shootout.

And there were plenty more saves, too, all the way through extra time.

But in the shootout, the Netherlands converted all four of their spot kicks.

“Of course you want to stop the penalty, but they shot better and I could not stop them,” Navas said.

Still, that shouldn’t cast a shadow on what Navas did against Uruguay, Italy and England in the group stage — or on the class he displayed against Greece and the Netherlands for 120 minutes in the knockout stages.

It was largely thanks to Navas and an impenetrable defense that Costa Rica reached the last eight for the first time.

In five matches Navas conceded a tournament-low two goals and he couldn’t be blamed for either of them.

The first was a penalty kick from Edinson Cavani in Costa Rica’s opening 3-1 win over Uruguay and the second was a rebound effort from Sokratis Papastathopoulos in the penalty-shootout win over Greece in the round of 16, which ended 1-1 after 120 minutes.

Papastathopoulos scored only after Navas had stopped a shot from Theofanis Gekas with a diving effort — with Costa Rica down to 10 men. Then, in the ensuing shootout for that game, Navas made the only save, diving to swat away Gekas’ attempt.

While the 27-year-old Navas may not have been well known until his run here, he recently enjoyed one of the best seasons of any goalkeeper in the Spanish league.

Navas was credited with a La Liga-best 160 saves for Levante during his most recent club season. He had 16 clean sheets and allowed 39 goals, meaning he stopped a La Liga-best 80.1 percent of the shots he faced.

No wonder Levante had offers for Navas from European runner-up Atletico Madrid even before the World Cup began. Now, though, Navas’ transfer fee could well have doubled.