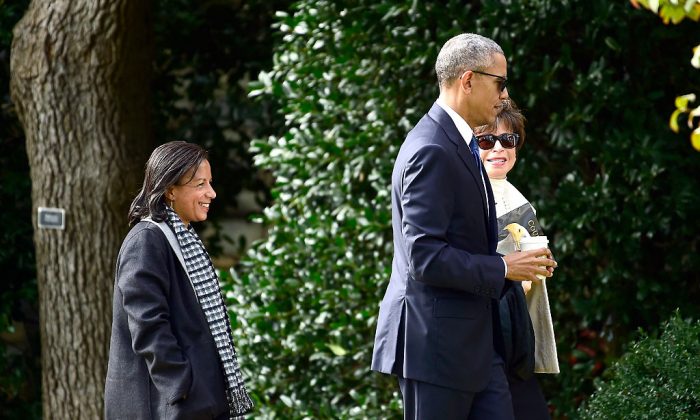 By all accounts, Obama and top officials discussed phone calls between Flynn and then-Russian Ambassador Sergey Kislyak during a White House meeting in the final days of the Obama administration. But the details about the conversation—including who brought up Flynn and when—differ from account to account, suggesting there is more to learn about what transpired at the Oval Office.

Deputy Attorney General Sally Yates said she first learned about the Flynn–Kislyak calls during the Jan. 5 meeting, according to a recently declassified summary (pdf) of Yates’s interview with special counsel Robert Mueller on Dec. 7, 2017. According to Yates, after the president was briefed about the Intelligence Community Assessment on Russian meddling in the 2016 election, Obama dismissed everyone present except for Yates and FBI Director James Comey. Obama then told Yates and Comey that he learned about the Flynn–Kislyak calls and the fact that the two men discussed sanctions.

Comey’s account of what transpired differs. In his recently declassified testimony (pdf) to the House Intelligence Committee on March 7, 2017, Comey said that Obama brought up the Flynn topic sometime during the Jan. 5 meeting, but didn’t mention whether the conversation occurred before or after Obama dismissed the rest of the officials from the Oval Office. According to Comey’s account, Obama brought up Flynn.

But according to a recently declassified email written on Jan. 20, 2017, by then-national security adviser Susan Rice, Yates and Comey weren’t the only people in the room with Obama after the rest of the officials were dismissed. Rice wrote that she and Vice President Joe Biden were present as well, contradicting the version of the events put forth by Yates. Rice’s email also contradicts Comey’s account, stating that Comey, not Obama, was the one to bring up Flynn’s calls with the Russian ambassador.

The exact details of the conversation in the Oval Office are significant in light of the recent motion by the Department of Justice (DOJ) to dismiss the charges against Flynn, who pleaded guilty to lying to the FBI in late 2017. The DOJ filed the motion together with a batch of records which show that the FBI had no basis to conduct the interview during which he allegedly lied. The day before the Jan. 5 White House meeting, the FBI approved the closing of Flynn’s case after finding no evidence to support the allegation that he was colluding with Russia. The formal paperwork was never filed after FBI management intervened to keep the case open.

The documents filed in court by the DOJ also go a long way to substantiate the theory that the top brass at the FBI may have set Flynn up.

Rice previously indicated that she wrote her Jan. 20 memo “upon the advice of the White House Counsel’s Office.” Rice’s attorney told the Senate in a letter that Rice wrote the memo two weeks after the meeting “because that was the first opportunity she had to do so, given the particularly intense responsibilities of the National Security Advisor during the remaining days of the Administration and transition.”

The discrepancies between the account provided by Rice and those by Comey and Yates suggests that the White House counsel may have sought to cast Obama’s involvement as reactive rather than proactive. President Donald Trump has recently spotlighted Obama’s potential involvement in the investigation of the Trump campaign by calling the operation “OBAMAGATE.”

As part of the investigation, the FBI obtained a spy warrant to surveil Trump campaign associate Carter Page. The warrant was based in part on an opposition research dossier on Trump paid for by the Clinton campaign and the Democratic National Committee.

It is still unclear who told Obama about the Flynn–Kislyak calls. Comey told the House Intelligence Committee in March 2017 that Director of National Intelligence James Clapper briefed Obama, Biden, and the senior White House team. According to a recently declassified transcript (pdf), Clapper told the same committee four months later that he didn’t brief Obama.