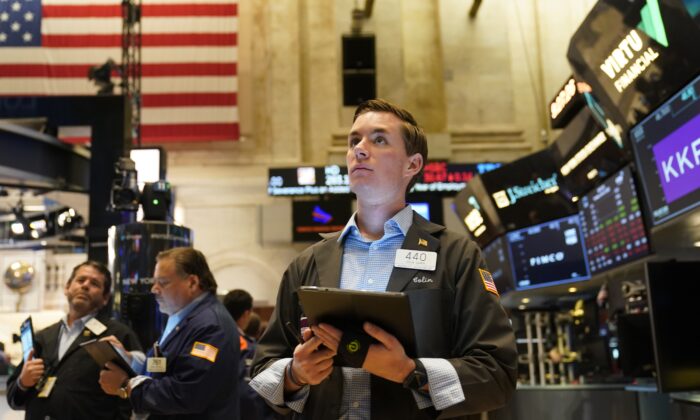 Traders work on the floor at the New York Stock Exchange in New York, on June 14, 2022. (Seth Wenig/AP Photo)
Inflation

A key gauge the Federal Reserve uses to assess the pace of inflation against the central bank’s 2 percent target fell more sharply than analysts expected in July, though it remains at near 40-year highs, suggesting little reprieve is likely from the central bank’s fight to tame inflation by hiking rates.

The core Personal Consumption Expenditures (PCE) price index, which strips out the volatile categories of food and energy and is considered to be the inflation tracker the Fed relies on most heavily when setting interest rates, clocked in at 4.6 percent in annual terms in July, government data show.

Market forecasts called for a 4.7 percent pace of growth in the core gauge, which reflects underlying inflationary pressures and is generally seen as the stickier component of inflation.

On a month-over-month basis, the core PCE inflation gauge rose 0.1 percent.  That’s well below market expectations for 0.3 percent and a considerable drop from June’s pace of 0.6 percent.

Bitcoin, a risk asset that has performed well on signs of possible monetary easing, rallied sharply after the PCE data were published, though the cryptocurrency later gave back much of the gains as investors digested data form the Department of Commerce, which indicated weaker-than-expected consumer spending, an ominous sign for the economy.

Powell reiterated that the Fed is determined to keep hiking rates to tame soaring inflation.

“Restoring price stability will likely require maintaining a restrictive policy stance for some time. The historical record cautions strongly against prematurely loosening policy,” Powell said at the event on Friday.

Some analysts reacted to the PCE data with expectations for a faster easing of monetary policy.

Hal Press, founder of hedge fund North Rock Digital, for example, said in a statement that he expects further downside for core inflation along with a growing likelihood of a Fed pivot toward looser monetary settings.

“It’s very likely inflation has peaked, and not only has it peaked but it’s also headed to the fed’s target. Pivot coming IMO,” he wrote in a statement on Twitter.

“Fed clearly looking in rear-view mirror in fighting inflation so aggressively,” he wrote in a statement also on Twitter.

Shortly before the data were released, interest rate futures were implying a 62.5 percent chance of a 75 basis-point rate hike in September.

Moments after the PCE numbers were published, the odds of a 0.75 percentage point rise dropped, to 42.5 percent.

Powell’s speech tempered those bets, however, sending the odds up to 56.5 percent for a bigger 75 basis-point hike, at the time of reporting.

Markets expected the annual pace of PCE inflation to increase, to 7.4 percent in June from the prior month’s 6.8 percent. Instead, July’s figure came in at 6.3 percent.

Consensus forecasts called for a 0.6 percent pace of monthly price growth in July’s headline PCE inflation measure, after the gauge jumped by 1 percent in June.

Behind the relatively rosy inflation picture provided by the PCE data, there was softness in consumer spending.

Consensus forecasts called for a 0.4 percent gain in consumer spending, with some analysts seeing this as an ominous sign for the economy.

Besides being weak in its own right, the consumer spending data also signal that the Fed is determined to raise rates to tamp down inflation, even if it means pushing the U.S. economy into a recession, Peccatiello suggested.

“Now, are you ready to hear Powell tell us the Fed will keep rates at 3.5 percent or higher even in a recession? They won’t stop until the inflation dragon has been properly slayed,” he argued.

Recessionary risks have mounted as the Fed has moved to tighten monetary policy aggressively to bring down inflation. At the same time, there has been cautious optimism that the central bank could slow the pace of its rate hikes if inflation continues to moderate, with the post-PCE data repricing of fed funds futures contracts reinforcing the rosy view.

Still, inflation remains a serious concern, and Powell’s speech made that clear, with the central bank chief appearing eager not to send dovish signals to markets.

Last year at roughly the same time, Powell insisted that the inflationary jump would likely be “transitory,” a prediction he later acknowledged was wrong.

As the Fed seeks to shape market expectations, a number of Fed officials in recent days have sought to hammer home the point that they will push interest rates up and hold them high until inflation has been squeezed out from the economy.

Some analysts expected Powell would reinforce that stance in his much-anticipated speech in Jackson Hole.

“Many will have marked Fed Chair Jerome Powell’s speech today as the highlight of the week,” analysts at ING said in a note.

“A likely scenario is that he will endorse the retightening of financial market conditions and thus also the trend toward higher market rates of late, given that the Fed still is a stretch away from getting inflation under control,” they said.

The Atlanta Fed’s interest rate probability tracker shows markets are expecting a peak in the federal funds rate at close to 3.8 percent in the first quarter of 2023, before pricing in rate cuts again.