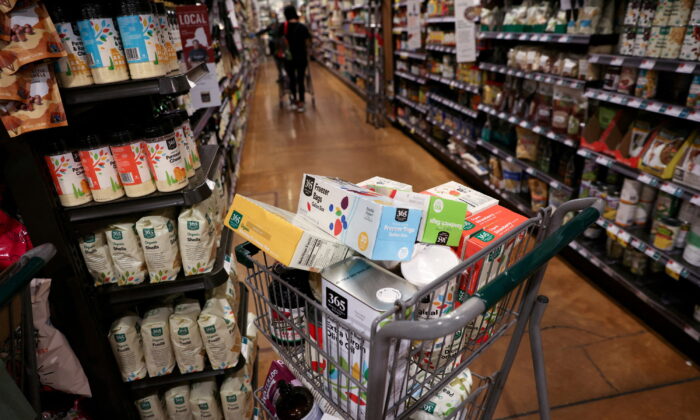 A shopping cart is seen in a supermarket as inflation affected consumer prices in New York City, on June 10, 2022. (Andrew Kelly/Reuters)
By Bryan Jung

U.S. inflation rates rose higher than expected in August, as investors expect a more aggressive monetary policy by the Federal Reserve in its efforts to curtail inflation toward the central bank’s preferred target of 2 percent.

The keenly watched Personal Consumption Expenditures price index (PCE) was published by the Bureau of Economic Analysis on Sept. 30.

The PCE, excluding the volatile prices of food and energy, rose 0.6 percent in August, after little growth in July, well above the 0.5 percent that many economists had predicted.

The news is another sign that inflation is spreading across the economy.

Inflation is still running well above the central bank’s long-run target of 2 percent.

The U.S. economy has been contending with its highest inflation since 1981, which currently stands at 8.3 percent as of August.

The Fed has been pushing a series of interest-rate hikes since March to combat the substantial rise in prices.

The central bank raised interest rates by 75 basis points last week for the third consecutive time, into a range of 3.0–3.25 percent, their highest levels since just before the Great Recession of 2008–09.

The Fed generally favors core PCE as the broadest indicator of where prices are heading, which it then uses to adjust for consumer behavior.

This was more than the 4.7 percent estimate for August, the same rate as the previous month.

Inflation is currently widespread, high, and persistent, according to Thomas Barkin, president of the Federal Reserve Bank of Richmond, on Sept. 30.

Barkin said that the Fed would “persist” with interest-rate increases and “not declare victory prematurely.”

However, he still sees “promising signs” of  improvement and that “inflation should come down. But I don’t expect its drop to be immediate or predictable.”

Headline PCE. including gas and energy, increased 0.3 percent in August, over a decline of 0.1 percent in July.

Prices jumped despite a sharp decline in average gas prices in August, after fuel costs fell below their high of $5 per gallon in June.

Personal income jumped 0.3 percent in August, in line with last month, while spending rates rose 0.4 percent after a decline in July, above previous expectations.

The PCE data have shown a consumer shift in spending, from goods back to services.

Service spending saw respective gains of 0.3 percent and 0.6 percent in the month.

Housing and utilities costs were up 1 percent, while health care jumped 0.6 percent.

Investors predict that the new report will likely mean that the Fed will persist with its hawkish policy, as inflation has not been affect so far by the boost in rates.

“Futures indicate that traders see a 68 percent chance of the Fed raising rates 75 basis points at its November meeting, up from 61 percent prior to the release of U.S. PCE inflation data,” noted Breaking Market News in a tweet.

Fed officials said they will remain vigilant about the need to keep tightening policy until the the rate hikes bring down prices.

However, many economists are concerned that higher interest rates run the risk of causing the economy to slow down too fast and cause a major economic downturn.

Fed Vice Chair Lael Brainard cautioned investors on Friday against “prematurely” ending the hawkish rate policy, explaining that interest rates will remain higher “for some time” until inflation is brought under control.

“Inflation is very high in the United States and abroad, and the risk of additional inflationary shocks cannot be ruled out,” she said.

“Monetary policy will need to be restrictive for some time to have confidence that inflation is moving back to target,” said Brainard at a meeting in New York.

“For these reasons, we are committed to avoiding pulling back prematurely.”