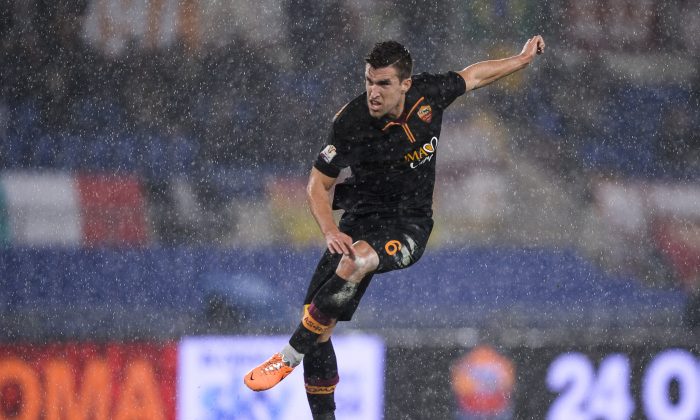 Roma have slapped a huge transfer fee on Kevin Strootman to deter a Manchester United bid.

Man United boss Louis van Gaal revealed that he is interested in a making a move for the 24-year-old Dutch international while on United’s pre-season tour in America.

“I never usually say anything about individual players,” Van Gaal said when asked about whether he had the intention to sign Strootman.

“It is my vision that we talk about a team and not individual players.

“But Strootman I can judge, but he is injured for more than six months.

“We have to wait and see how he comes back.

“It is not easy to say how he comes back from injury, but we will wait and see.”

Strootman injured his anterior cruciate ligament in March, and is currently in rehabilitation.

In response to Van Gaal’s statement, Roma coach Rudi Garcia replied: “What can I say about the rumors [about Strootman joining United]…”

“Maybe after a three-digit offer [i.e. 100 million euros], then we will sit down and think about it.”

Strootman joined Roma in the 2013/2014 season, and was instrumental in the side, scoring 5 goals and providing 6 assists in 24 appearances.

According to WhoScored, the highly rated Dutch midfielder also completed 88.3% of his passes last season.

To say that Strootman was crucial to his national side is perhaps an understatement. Van Gaal, who was Holland’s national coach before accepting the Man United job, had envisioned a key midfield role for Strootman, but was forced to reshape his entire team to compensate for the Dutch star’s absence at World Cup 2014.