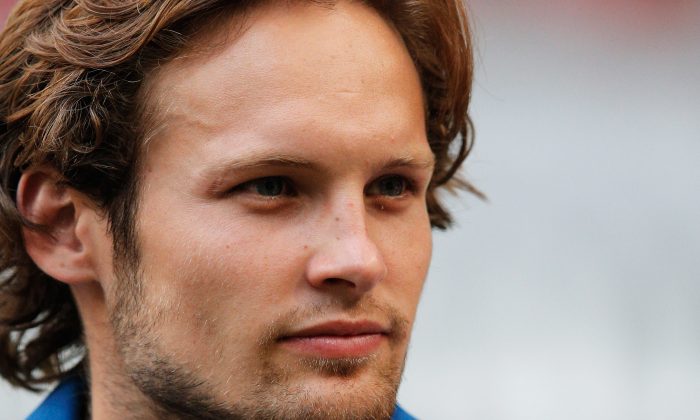 Daley Blind of Ajax looks on after the 19th Johan Cruijff Shield match between Ajax Amsterdam and PEC Zwolle at the Amsterdam ArenA on August 3, 2014 in Amsterdam, Netherlands. (Photo by Dean Mouhtaropoulos/Getty Images)
Soccer

Kevin Strootman and Daley Blind have been linked with a move to Manchester United.

New Man United boss Louis van Gaal is looking to sign a midfielder and a defender, and has targeted his Dutch compatriots Strootman and Blind.

As the former Netherlands national coach, Van Gaal is familiar with both players, and knows what he is getting by signing them.

According to Goal.com, Van Gaal might wait until the January transfer window to sign Strootman. This is because the Roma central midfielder is still recovering from a serious knee injury, and will not make much of an impact for United if signed in the summer.

In any event, Roma are not keen to sell their star midfielder, unless the price is right. Roma coach Rudi Garcia suggested that United will have to cough up £79 million if they are really keen on getting Strootman.

Similarly, Ajax manager Frank de Boar is willing to let Dalely Blind leave, if United can cough up the cash.

In an earlier interview, De Boar said, “‘Everyone is obviously for sale, but we feel that those three players, the World Cup players [Blind, Jasper Cillessen and Joel Veltman], with a few guys in the current squad, should be the water carriers of this squad.”

Van Gaal has made it clear that he needs specialists wing-backs and wide players in order to play his preferred 3-4-1-2 and 4-3-3 formations, and Blind fits the bill.

Blind is comfortable with playing on the flanks and in central midfield, two areas that United are currently weak in because several players have moved on.

Left backs Patrice Evra and Alexander Buttner have been sold, while United have not been able to replace Paul Scholes in the center of the park for a couple of seasons.