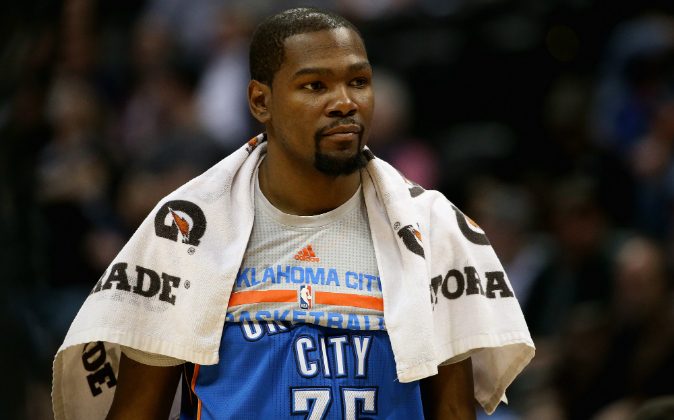 Kevin Durant #35 of the Oklahoma City Thunder looks on from the bench late in the game against the Denver Nuggets at Pepsi Center on April 5, 2016 in Denver, Colorado. (Photo by Doug Pensinger/Getty Images)
NBA

In an interview with the Wall Street Journal for its article, “Why NBA Players Lie About Their Height,” Durant revealed he is a few inches taller than his NBA profile indicates.

“I’m 6’11,” revealed Durant as he recapped his block shot on Los Angeles Clippers Chris Paul. Durant is listed as 6’9.

The small forward’s reason behind his lie is due to positions on the basketball court.

“But really, I’ve always thought it was cool to say I’m a 6-9 small forward,” he said. “Really, that’s the prototypical size for a small forward. Anything taller than that, and they’ll start saying, ‘Ah, he’s a power forward.’ ”

The 27-year-old isn’t the only star whose height has been slightly altered by the NBA.

The reason slight differentials in height all comes down to “the NBA doesn’t require players to use their ‘in shoes’ measurements.”

Golden States Warriors coach Steve Kerr doesn’t have an explanation for the variations in height stated, “I don’t know—I guess it just sounds better on the program.”

Durant and the Oklahoma City Thunder are currently battling the San Antonio Spurs in the semifinal rounds of this year’s playoffs. The series is currently tied at 1-1 and the next game is scheduled for Sunday, May 8 at the Chesapeake Energy Arena, Oklahoma City, Okla.

The broadcast will air on ABC at 8 p.m.