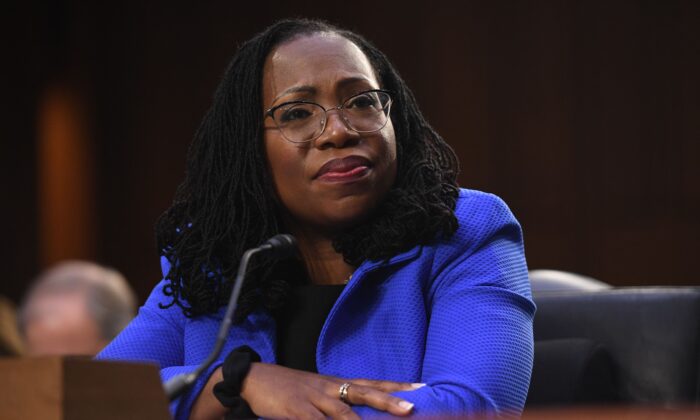 Is there a place for moral relativity on the US Supreme Court?

The legacy media trumpeted by President Joe Biden’s nomination of Ketanji Brown Jackson to the U.S. Supreme Court were beside themselves while gushing about her “historic nomination.”

Do a Qwant web search on that phrase plus “Ketanji,” and the results are dozens of links to articles and video clips from Democrats, academics, media talking heads, and left-of-center nonprofit organizations gushing with praise about her nomination (examples here, here, here, here, and here).

In making the announcement, the White House statement claimed that Judge Jackson could “speak to a mainstream understanding of the Constitution.” “Mainstream” and “our values” are cliches that the Democrat Party and their allies in the media and academia frequently use to mask their radicalism and deviation from traditional American concepts.

Let us examine whether Jackson’s values comport with those of the average American.

Jackson is intelligent and articulate and is an experienced judge (currently serving on the U.S. Court of Appeals for the District of Columbia Circuit). She served for four years as the vice-chairman of the U.S. Sentencing Commission from 2010 until she was appointed by former President Barack Obama as a district court judge in Washington in 2014.

She checked the boxes needed to make her a well-qualified nominee, according to the secularist American Bar Association. Judicial philosophy, including considerations of basic moral values intertwined with many legal statutes, has given way to revised ABA core goals that include “Eliminate Bias and Enhance Diversity” and “Advance the Rule of Law,” as noted on the ABA website.

The very concept of “diversity” is intentionally divisive, while “advancing the rule of law” masks judicial activism under the concept of using “precedent” in making decisions.

It is important to understand that the ABA has moved ideologically leftward, as have many of America’s institutions over the past 100 years.

Secular Evolution in US Institutions

The United States was formed as the pinnacle of Western civilization with a Constitution and body of laws informed and shaped by centuries of political and religious-philosophical analysis. The United States grew and evolved exclusively from Judeo-Christian roots, and so did its federal system of laws and the courts. All other religions have had a negligible impact on the development of traditional American institutions and government entities from 1781 to the present.

Over the last 80 or so years, Americans have been “convinced” by secularists, such as those at the American Civil Liberties Union, that Judeo-Christian values have no play in modern America, whether in the courtroom or Congress, or the public square. Nobody in the federal government raises the subject of God or moral values anymore except to try to fool voters into thinking that the speaker is actually a God-fearing and moral person. The ABA is right there with the rest of the secularists in that respect!

But that is not the way the Founding Fathers saw it. On the contrary, references to God and the Divine are thoroughly infused in their political and personal writings. The Constitution they wrote, the government they formed, the institutions they established, and the laws they wrote were meant for moral people, as defined by those Judeo-Christian principles.

You don’t believe me? Then it would help if you read: “The Christian Life and Character of the Civil Institutions of the United States” by Benjamin Morris. It was written in 1864 and will amaze when compared to what Americans have been taught about their institutions by secularists in recent years.

Christian concepts and principles infused American institutions, including the law and our courts, from the beginning of the Republic. Individual morality mattered to the Founders! Why else were witnesses required to “swear on the Bible” to tell the truth before testifying in a court of law?

The ABA would apparently have us believe that morality should no longer be a factor in the law and our judicial system. Yet the ABA says that Jackson is “well-qualified.”

During two days of testimony, which began on March 21, before the Senate Judiciary Committee, several clues about Jackson’s judicial philosophy and underlying morality were elucidated under questioning by Republican senators.

In response to questions from Sen. Marsha Blackburn (R-Tenn.), Jackson described her decision-making process in making rulings during court cases. This included her listening to the arguments of both sides in a given case as equals under the law, using her discretion under federal sentencing guidelines to assign punishment for the convicted, and displaying empathy for victims and the accused/convicted in apparently equal proportion, including during sentencing.

The latter is very troubling, as there is a world of difference between a child victim of a sex crime (including child pornography) and the convicted perpetrator of that crime. The sentencing process is not about determining guilt or innocence; that has already been accomplished.

The moral gap between the victim and the convicted cannot be bridged by a display of empathy by a judge during sentencing. Showing empathy to the convicted is not even a legal concept under the law. It would appear that Jackson does not understand—or chooses to ignore—basic concepts of Judeo-Christian morality that inform the very laws that she is supposed to endorse as a federal judge.

According to the A3P research, Jackson has consistently stated that sentences and punishments for sex offenders were, in general, too harsh and stigmatizing. When she worked on the U.S. Sentencing Commission, Jackson declared that mandatory minimums for sex offenders targeting children are “excessively severe and might be applied inconsistently.”

Democrats on the Senate Judiciary Committee are still refusing to release Jackson’s records when she was a member of that commission, which is a red flag that credible information in those files would be highly damaging to the nominee.

Under questioning by Sen. Josh Hawley (R-Mo.) on the subject of mandatory minimums for sex offenders, Jackson tried to excuse her issuance of light sentences for pedophiles by claiming that her “severe tongue-lashing” of them when delivering her sentencing decision somehow substitutes for all of the incarceration allowable under sentencing guidelines.

That rationale, plus her empathy for the convicted, is astounding. Then, her sentencing pattern for convicted pedophiles is this: a tongue-lashing plus the lightest sentence under the sentencing guidelines. Contrary to the White House’s claims, these are not the “mainstream values” of traditional Americans.

Another of Jackson’s answers under Republican questioning was equally troubling. She refused to define the term “woman”—or even acknowledge the physical differences between men and women—by claiming she was not aware of the context of the term used in a particular case of hers that was under discussion.

In response to Blackburn’s request to define the term, Jackson responded, according to The Federalist: “Senator, in my work as a judge, what I do is I address disputes. If there’s a dispute about a definition, people make arguments, and I look at the law and I decide.”

Does that mean that she believes the definition is somehow “elastic” (elasticity of standard word definitions being a left-wing judicial philosophy these days)? What might 30 years of her “elasticity” bring to American jurisprudence?

Jackson’s testimony conveys her unstated judicial philosophy, at the core of which is moral relativity. She seems to put victims and convicted pedophiles (and others) on the same moral plane, jumps over backward to convey empathy to those convicted of crimes against children (as if the victims and the convicted are on the same moral plane), and refuses to convey traditional definitions of words in favor of ideological “elasticity” in future service of left-wing activism through the law and “extreme radicalism,” as pointed out by the New York Post here.

Through her lifetime record of left-wing judicial activism, light sentencing of convicted pedophiles, equivocating between victims and the convicted, and using a flawed process to determine sentencing, Jackson is quite apparently unmoored from any Judeo-Christian moral foundation, which has underpinned U.S. laws and the legal system since the country was founded.

Jackson’s values are not those of average Americans, who support maximum sentences for convicted pedophiles. Her true judicial philosophy is based on moral relativity—an alien and un-American concept that disqualifies her from the U.S. Supreme Court.