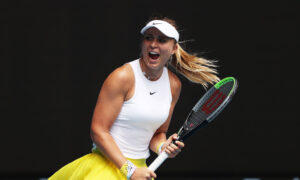 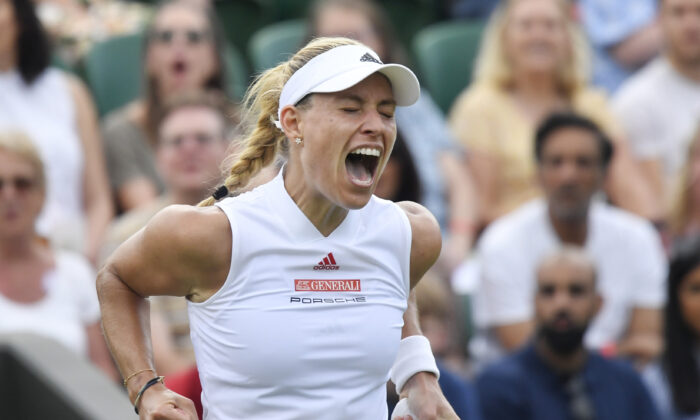 Germany's Angelique Kerber celebrates during her second round match against Spain's Sara Sorribes Tormo during The Wimbledon Championships at the All England Lawn Tennis and Croquet Club, London, Britain, on July 1, 2021. (Toby Melville/Reuters)
Tennis

LONDON—Three-times Grand Slam champion Angelique Kerber held off a spirited challenge from Spain’s Sara Sorribes Tormo to win 7–5 5–7 6–4 on Thursday and book her place in the Wimbledon third round.

Kerber arrived at the All England Club brimming with confidence having won the grasscourt title at Bad Homburg—her first tournament victory since defeating Serena Williams in the Wimbledon final three years ago.

The 25th-seeded German made a sure-footed start and gave very little away on her own serve before breaking Sorribes Tormo’s serve with consecutive forehand winners to go up 5–3.

Sorribes Tormo, ranked 50th in the world, roared back to draw level at 5–5 but continued to leak unforced errors, allowing Kerber to regain composure and take the opening set.

After an early trade of breaks, Kerber showed glimpses of her best tennis with a string of booming backhand winners to take a 4–2 lead and threatened to run away with the match.

But Sorribes Tormo, who has never progressed beyond the second round at any major event, halted her opponent’s momentum with deft touches at the net to break back immediately, before saving a match point to stretch the contest to a decider.

Both players dropped serve twice in a chaotic start to the final set as fatigue started to set in before Kerber regained control by converting her seventh breakpoint.

The former world number one held her nerve to seal victory in three hours and 18 minutes as the crowd at Court Two gave the players a standing ovation.