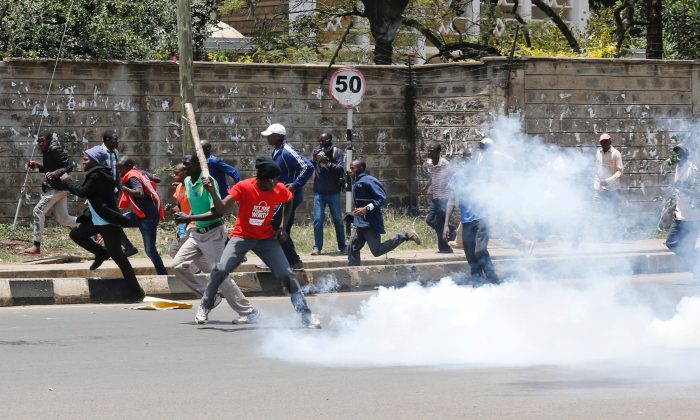 NAIROBI—Kenyan police used tear gas and batons on Tuesday to disperse protesters calling for election officials to be sacked before the re-run of a contested presidential vote.

Several volleys of tear gas were fired near the election commission headquarters in central Nairobi, a Reuters witness said. When they regrouped, officers fired more tear gas and beat some of them with batons.

Raila Odinga, who lost his presidential bid on Aug. 8 will get another chance, after the Supreme Court annulled President Uhuru Kenyatta’s re-election, citing irregularities, and ordered a fresh vote to happen within 60 days.

Odinga has said he would not participate in the re-run scheduled for Oct. 26 if election officials are not sacked and prosecuted.

The court did not find any individual responsible but said institutional failings had led to irregularities and illegalities in the transmission of election results.

Last week Kenya’s chief prosecutor ordered investigations into 11 election board officials including its chief executive, Ezra Chiloba, as well as a lawyer and campaigner who worked for Odinga.

Some Kenyatta supporters also took to the streets in Nairobi but there were no clashes between the two sides.

In the port city of Mombasa, a crowd gathered at local election office, chanting: “No reforms no elections. Chiloba must go!”

Underscoring the rising tensions, a newly elected opposition lawmaker was charged with subversion at a court hearing in Nairobi on Tuesday.

Paul Ongili Owino was arrested after a video clip of him speaking while campaigning for Odinga emerged on social media.

“If (former Libyan leader Muammar) Gaddafi was removed by the citizens, if (former Gambian president) Yahya Jammeh was removed by citizens. Who are you? You are a son of a dog,” Owino said.

The prosecution said those words were “calculated to excite disaffection against the presidency”.

Ahead of Tuesday’s demonstrations by the opposition National Super Alliance coalition, President Kenyatta said violence would not be tolerated.

“People are free to demonstrate but they must ensure that they do not destroy other people’s property,” he said.

“Let them not think that they will break into other people’s shops and interfere with the daily routine of other Kenyans. That, we shall not allow.”

In the western city of Kisumu, an Odinga stronghold where some 3,000 protestors gathered, one protestor, vegetable market vendor Hellen Aketch said: “I will support anything that assures me of the validity and the safety of my vote in the upcoming elections.”

“I have closed business today and I am ready to do it again so long as some sanity is realized among those who hold public office.”