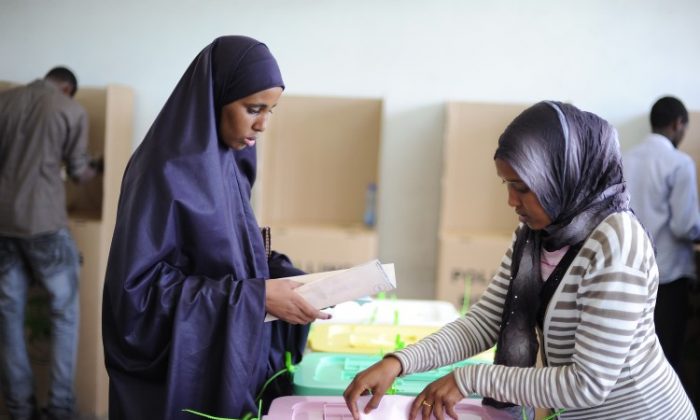 An armed security officer guards on March 5, 2013 election results in ballot boxes that have been tallied at a tallying centre in Kakamega, western Kenya, a day after the country held national elections. (Tony Karumba/AFP/Getty Images)
Africa

Votes in the Kenyan national elections that took place Monday are still being counted, but Krzysztof Lisek, head of European Parliament’s election observation delegation to Kenya, has expressed hope that the country can avoid the violence that followed the 2007 elections.

In 2007, post-electoral violence caused 1,133 deaths and about 600,000 people to be displaced. Analysts have said if Kenya can get through the 2013 elections peaceably, it could set a precedent for post-conflict transformation in Africa.

“We can make mistakes, but we can learn from our mistakes to build a strong democracy in Africa,” Vincent Tohbi, head of the Electoral Institute for Sustainable Democracy in Africa (EISA) Technical Mission to Kenya, said in a telephone interview Wednesday. He said Zimbabwe, Madagascar, and Somalia could all look to Kenya as an example, so “Kenya must be very careful.”

Lisek released a statement Wednesday saying the elections have proceeded in a “largely calm and orderly” fashion, in spite of the deaths of several police officers leading up to election day.

Kimaiyo reported that a group of about 200 secessionists armed with machetes and a variety of other weapons killed five of the officers in a coordinated attack.

Tohbi says these were isolated incidents and are not necessarily signs of greater violence to come.

U.N. Secretary General, Ban Ki-moon, echoed Lisek’s hopes for a peaceful election overall, in spite of these attacks, and urged the Kenyan people to maintain peace and patience while awaiting the results.

“I have been encouraged thus far by the largely peaceful and orderly process, despite some incidents of violence and some technical problems,” Ban said in a statement. “We have all seen the inspiring images of Kenyans turning out in large numbers with great patience.”

The “technical problems” Ban referred to was a glitch in the electronic counting system. It froze when less than half the votes had been counted, forcing the electoral commission to rely on paper tallies.

Another hiccup occurred in the tallying process—approximately 300,000 ballots were rejected for not following voter rules.

The ballots, though initially rejected, will now be included, according to The Washington Post. Prime Minister Raila Odinga’s supporters had complained when the votes were rejected; the inclusion of these ballots has set back candidate Uhuru Kenyatta’s lead over Odinga.

Before the inclusion of the 300,000 ballots, Kenyatta’s lead was 53 percent compared to 42 percent for Odinga.

Kenyatta must secure 50 percent of the votes to become the next Kenyan President. If he does not, a runoff election is expected in April.

The violence in 2007 was sparked when Odinga contested the election results that gave incumbent President Mwai Kibaki another term.

Kenyatta has been indicted by the International Criminal Court for crimes against humanity, but nonetheless remained the favorite in polls leading up to the election. He has the advantage of tribe loyalty as a member of the largest tribe in Kenya, the Kikuyu.

The violence in 2007 was sparked when Odinga contested the election results that initially put incumbent President Mwai Kibaki back in power.

Kenyatta has been indicted by the International Criminal Court for crimes against humanity, but nonetheless remained the favorite in polls leading up to the election. He has the advantage of tribe loyalty as a member of the largest tribe in Kenya, the Kikuyu.

The glitches in tabulating the votes may cast some doubt on the legitimacy of the result, Tohbi said. But, he added, “It has been a process where all parties have had a say. We must keep the same consensus.”

Tohbi said that as long as the candidates “are willing not to give some inflammatory speeches and incite people to raise up,” and if the Kenyan people, who turned out in high numbers to vote peacefully, “show the same love for the nation by not being involved in any violent initiative,” then “we will have a new Kenya.”