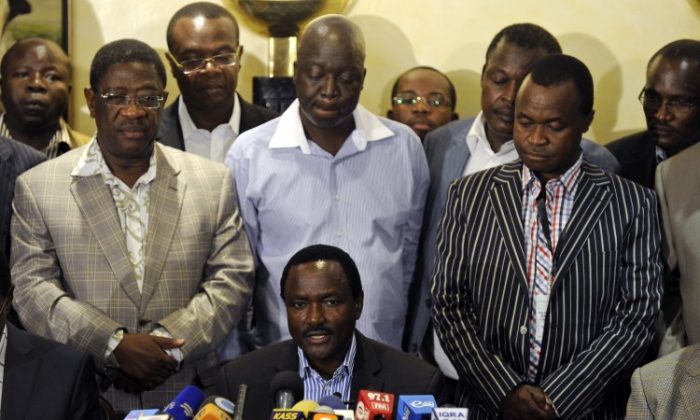 Kalonzo Musyoka (bottom), Kenya's outgoing vice president and running mate of CORD alliance's presidential candidate Prime Minister Raila Odinga, gives a press conference flanked by other alliance members on March 7, 2013, in the Kenyan capital, Nairobi. He alleges that vote results have been "doctored" and demands a halt to vote counting, stressing, however that his accusations are "not a call to mass action." (Tony Karumba/AFP/Getty Images)
Africa

Kenyan elections could turn violent as in 2007 when disputed results caused a violent clash. Prime minister and presidential candidate Raila Odinga’s camp is calling foul on vote counting that has been delayed for days by equipment failures.

Kenyan prime minister and presidential candidate Raila Odinga’s camp is calling foul on vote counting that has been delayed for days by equipment failures.

These elections have been hailed as a significant test for Kenya—can it avoid repeating the violence that erupted when election results were announced and disputed in 2007?

Prime Minister Odinga called foul on the results in 2007 when incumbent President President Mwai Kibaki was reelected. In the resulting clash, more than 1,000 died and hundreds of thousands were displaced.

Although the Kenyan elections have proceeded in relative peace thus far, as anthropologist and political commentator trained at the University of Chicago Codrin Stefan Arsene said Wednesday: “Let’s not forget that the worst of violence after the 2007 elections occurred after the winner was announced. So we are not yet out of the forest.”

The elections took place on Monday, but the votes may not be tabulated now until the end of the week, reported the BBC. A glitch in the electronic counting system has delayed the process.

Odinga’s running mate, Kalonzo Musyoka , is the one who publicly questioned the credibility of the results. But, he says, it is not a call to violence.

Arsene and Vincent Tohbi, head of the Electoral Institute for Sustainable Democracy in Africa (EISA) Technical Mission to Kenya, agree the politicians will determine whether peace reigns in Kenya.

Candidates must be “willing not to give some inflammatory speeches and incite people to raise up,” said Tohbi in a phone interview Wednesday.

Arsene said it is not the voters who will question the validity of the results. “Politicians using their power and influence are the main actors who incite, finance and orchestrate riots in Kenya as a means to grab a larger slice of the pie,” he wrote in an email.

Whatever the results, Arsene does not foresee either side budging, and he thinks a clash is almost inevitable: “Neither [candidate] knows how to lose with grace. But more importantly, those financing them to victory will not be willing to concede to the other camp.”

“So no matter what the outcome is, fireworks will follow,” said Arsene. “This is a fact.”

Tohbi still hopes Kenyans will remain calm, and if the candidates maintain the tone they have had leading up to the elections, he said, there is still hope for peace.

Arsene’s only hope is that foreign powers will use their influence to minimize the violence.