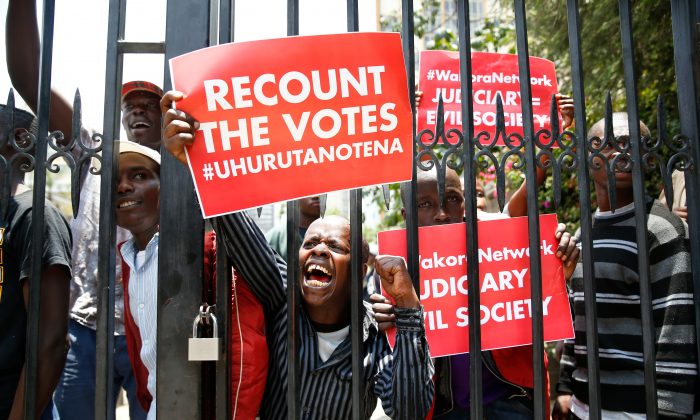 Supporters of Kenya's President Uhuru Kenyatta carry placards as they demonstrate outside the Supreme Court in protest of the nullification of Kenyatta’s victory by the Supreme Court Judges in Nairobi, Kenya, September 19, 2017. (Reuters/Baz Ratner)
Africa

Kenya Supreme Court Criticizes Election Board in Verdict on Polls

NAIROBI—Kenya’s Supreme Court on Wednesday criticized the election board for failing to verify official results of last month’s presidential election before announcing them but stopped short of saying there was rigging.

The court was offering a detailed ruling as to why it annulled the Aug. 8 election and ordered a fresh presidential vote within 60 days. The Sept. 1 decision was the first of its kind in Africa.

Election board officials had said incumbent President Uhuru Kenyatta won the contest by 1.4 million votes. Opposition leader Raila Odinga rejected that result and said he had won. He has also said the previous two elections were stolen from him.

Kenya has the region’s richest economy and is a diplomatic, trade and security hub for East Africa so the court’s ruling, as well as the fresh election currently scheduled for Oct. 17, is being closely watched.

On Monday, the French technology company supporting the election said it would be nearly impossible to be ready for that date.

The court on Sept. 1 identified some procedural problems in a brief ruling but the key finding against the election board on Wednesday was that officials had announced results before being able to verify them.

The system was designed that way after a disputed 2007 presidential vote sparked violence that killed around 1,200 people and displaced around 600,000 more.

But the board overseeing the 2017 vote did not have all the tally forms when they announced official results, and some forms lacked security features like water marks, signatures or serial numbers, calling their authenticity into question, the court said.

“Not every irregularity, not every infraction of the law is enough to nullify an election. Were it so, there would not be any election in this country, or even the world, that would withstand judicial scrutiny,” said Chief Justice David Maraga.

But, he said, “these discrepancies were widespread … the election did not meet the simple test … we are unable to validate the result.”

Judge Philomena Mwilu said the forms should have been quickly available for inspection, noting officials said thousands of forms from polling stations were still unavailable four days after the official results were announced.

“The (board) cannot therefore be said to have verified the results,” she said. “It is an inexcusable contravention … of the election act.”

She also censured the board’s refusal to comply with court orders to open its computer servers, saying it meant that opposition claims of hacking or manipulation could be true.

“Noncompliance or failure by the board to do as ordered must be held against it,” she said.

But although the tallying process was questioned, voter registration, identification and voting all appeared to be “conducted in accordance with the law,” she said.

The election re-run has divided Kenya, with many opposition supporters celebrating it and the president and some members of the ruling party criticizing it harshly.

On Tuesday evening, Deputy President William Ruto tweeted: “So has CJ taken sides? Listening to the tone, language & drift of (Chief Justice David) Maraga’s lecture the only phrase missing is NASA HAO! TIBIN! & TIALALA!” — phrases that are a rallying call for the opposition coalition.

Earlier, the chief justice told a news conference that judges were getting death threats and the police were not offering adequate protection, an allegation that the chief of police denied.

By George Obulutsa and Maggie Fick