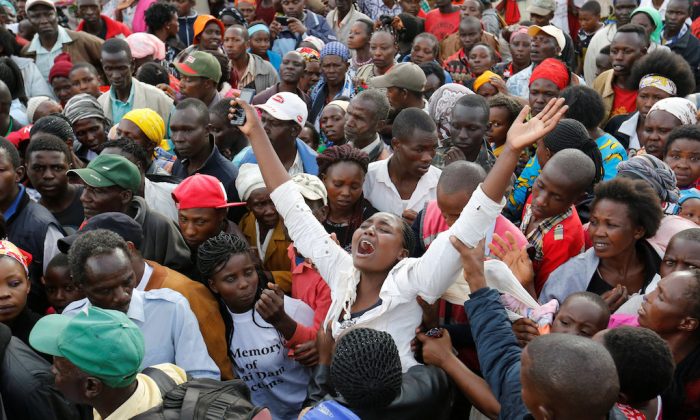 A mourner reacts as they prepare to bury their relative killed when a dam burst its walls, overrunning nearby homes, in Solai town near Nakuru, Kenya May 16, 2018. (REUTERS/Thomas Mukoya)
Africa

SOLAI, Kenya—Kenya on Wednesday buried 41 people who were killed last week when a dam at a commercial farm broke its walls and unleashed water that swept away everything in its path.

The earthen dam on the farm, which grew roses for export to Europe, burst at night on May 9 after heavy rains, killing 47 people and displacing hundreds more.

“We are here to mourn with you and all other Kenyans who have lost loved ones due to the ongoing floods affecting Kenya,” President Uhuru Kenyatta said during a funeral mass.

After a severe drought last year, two months of heavy rain have affected nearly a million people in Kenya, Somalia, Ethiopia and Uganda. Bridges have been swept away and roads turned into rivers of mud.

More than 150 people have been killed and 300,000 displaced in Kenya, where the damage runs into millions of dollars.

Six police lorries ferried the 41 coffins of the victims who were buried in Solai, 190 km (120 miles) northwest of Nairobi, and then young men carried the caskets up the hills in the area to their graves.

“The water washed them away four kilometers from where our house was,” he told Reuters.

Ten victims who owned land in the area were buried in a single grave.

Investigations into the dam disaster are continuing and Kenya’s water management agency has said the structure was built without necessary approvals.