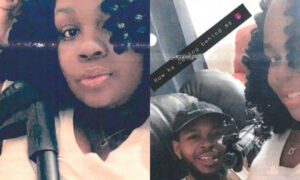 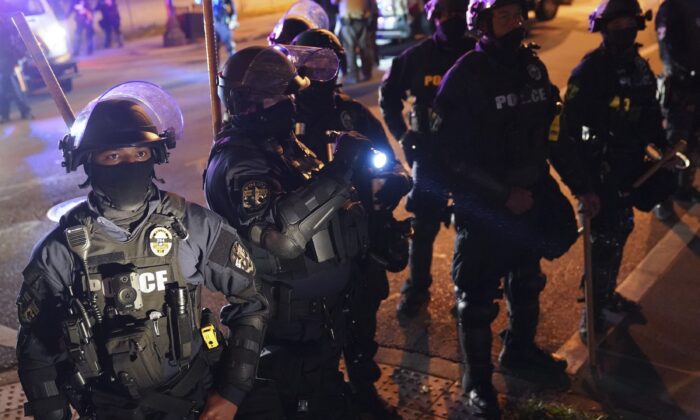 Police speak with protesters at the First Unitarian church, in Louisville, Ky., on Sept. 24, 2020. (John Minchillo/AP Photo)
Crime and Incidents

A bill that would make it a crime to taunt police officers was passed on Thursday in Kentucky’s Senate.

Senators voted 22-11 to pass Senate Bill 211, which was described by proponents as an anti-riot act.

The legislation would increase violations that accused rioters face, in addition to adding a section that says a person is guilty of disorderly conduct if they accost, insult, taunt, or challenge a law enforcement officer “with offensive or derisive words, or by gestures or other physical contact, that would have a direct tendency to provoke a violent response from the perspective of a reasonable and prudent person.”

It would also define a riot as “a public disturbance involving an assemblage of five (5) or more persons which by tumultuous and violent conduct creates grave danger of damage or injury to property or persons or substantially obstructs law enforcement or other government function.”

State Sen. Danny Carroll, a Republican and retired police officer who introduced the measure, said it was a response “to the riots that occurred across our country during this past summer including in our own flagship city of Louisville.”

“These are riots that led to billions of dollars of damage, injury and loss of life. The goal of Senate Bill 211 is to help protect our communities, protect our first-responders and protect public and private property,” he said before the vote. “I will not support, or condone, or tolerate anyone’s right to riot and terrorize, assault, destroy, abuse. I’ll never defend anyone’s right to do that. You can twist this bill around all you want. The language is very simple and very clear as to what it addresses.”

State Sen. Gerald Neal, a Democrat, said existing laws are sufficient and that the legislation “is an overreach.”

Carroll told colleagues who expressed concern over the taunting portion of the proposal that he would work with House members on amending that section. Republicans control both chambers in the state, while Gov. Andy Beshear is a Democrat.

He also said he supports peaceful protests and noted that a slew of legislative proposals deal with some of their concerns, such as one that would cut down on the use of no-knock warrants.

Protesters upset over the shooting of Breonna Taylor last year condemned the alleged use of a no-knock warrant in that case, though an investigation later found that police officers did knock before barging into the apartment.

Officers fired their weapons after Taylor’s boyfriend shot at them. Taylor was struck and died.

The American Civil Liberties Union was among the groups criticizing Carroll’s bill, calling it “an extreme bill to stifle dissent.”