Kentucky Parents Fear for Children’s Safety After Student Who Wrote ‘Kill List’ Is Allowed to Return to School: Reports 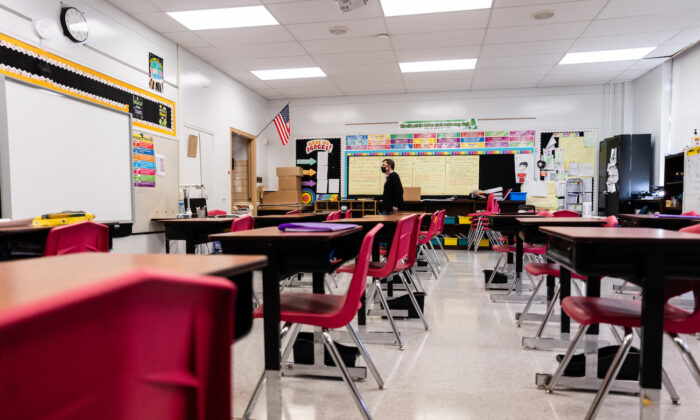 An empty classroom in the United States in a file photo. (Jon Cherry/Getty Images)
By Katabella Roberts

Parents of children at a Kentucky school where a 14-year-old student allegedly wrote a “kill list” last year have voiced concerns for their children’s safety after the student was reportedly allowed to return this month.

The student at Conner High School in Hebron, who has not been identified, allegedly threatened several eighth-grade students in 2021 and suggested he would carry out a mass shooting. Some of the students named on his alleged “kill list” include the school principal’s son, according to local reports.

He was later expelled by the Boone County School Board and Superintendent Matthew Turner and charged with second-degree terroristic threats, WLWT reported.

However, the student was reportedly welcomed back to the school this month, a year after being expelled, prompting outrage and concern among parents.

During the Boone County School Board of Education meeting Thursday night, one concerned parent, Deanne Corbin, said she feared for the safety of her children.

“Whatever help he has gotten, he is still a threat to be in an environment which fostered him to want to do a mass shooting and make a list of our students of Conner Middle School that are now at Conner High School,” Corbin said, according to WLWT.

Principal’s Own Son ‘Could Be in Danger’

“It is unfair to the children, the victims as I call them, that were on this list for him to be in that school whether or not he’s in their classroom, they have to know he’s in their building. They know he walks down the hallway and they have to pass him,” Corbin added.

“As a father of a child on the active kill list, my statements will reflect my opinions based on the information I received from Conner High School. When I received a call from the principal, it was emotionally devastating. All I could think about was my child in danger when they did nothing wrong,” another parent, Rob Bidleman said, according to the news outlet.

Another parent, Jenny Murray, noted that the principal’s own son was on the student’s alleged “kill list.”

“As dedicated and hard-working as he is—how is he not distracted by stress and anxiety, knowing that his son could be in danger?” Murray said, according to WXIX.

According to local reports, the 14-year-old student at the center of the concerns was enrolled at Conner Middle School when the allegations surfaced in November 2021.

The school resource officer (SRO) was informed of a notebook that contained specific acts of violence, identified individuals, and described how the student who owned the notebook would have the students “locate them or have them respond to an area where he would encounter them,” WXIX reported, citing the sheriff’s office.

According to the report, the student admitted to the SRO that he had written the contents of the notebook but claimed that he was “merely writing the thoughts down that were in his head” and was not planning to carry out any of the acts stated in the notebook.

He was later expelled, in line with state statute (pdf) which says that the threat of force or violence, among other things, constitutes cause for suspension or expulsion from school.

In a statement on Facebook on Monday, newly-elected state Rep. Steve Rawlings, a Republican, said he had attended Thursday’s school board meeting when the “very serious issue” of the student came up.

“A student, who had been suspended for one year, was permitted to return to school in Boone County,” Rawlings wrote. “I want to clarify that although I was in attendance at this past week’s meeting, I was not involved with the decision, nor have I been informed of all the details of the facts and circumstances surrounding the original disciplinary action or the student’s return to school. Those decisions are solely the responsibility of local authorities.”

Elsewhere, school Superintendent Matthew Turner wrote in a letter to parents and community members that the safety of students and staff is the school’s greatest priority, according to WLWT.

“We also partner in decision-making with experienced legal counsel. With the assistance of the Boone County Sheriff’s Department, our School Resource Officers, as well as the District Safety team, I can assure you all appropriate safety measures have been taken and are in place. Conner High School remains a safe school,” Turner wrote.

With that being said, the superintendent noted that each child has the right to an education, without prejudice, under the Kentucky state Constitution, and that the school is obligated to follow state law.

“We will continue to be vigilant regarding these matters and we appreciate the community’s support,” he noted.

The Epoch Times has contacted Conner High School and the Boone County School Board for comment.