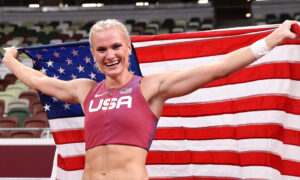 IZU, Japan—Laura Kenny became the most-decorated female Olympic cyclist as she rode to a fifth gold medal by partnering British team mate Katie Archibald to a commanding victory in the first-ever women’s madison in the Games on Friday.

The British stamped their authority on a frantic race early on and their points advantage grew as main rivals the Netherlands were involved in a crash with 70 of the 120 laps remaining.

Kenny and Archibald, taking turns around the 250 metre oval to hammer out a relentless pace, kept racking up points, winning 10 of the 12 sprints, and the only question was who would trail home in second place.

Kenny, who was already Britain’s most successful female Olympian, had been level on four golds with Dutch rider Leontien van Moorsel who claimed three on the road and one on the track.

She suffered her first-ever defeat in an Olympic race when Britain lost their team pursuit crown to Germany this week, but she and Archibald hit back from that upset in style.

“With Katie I feel like I’m racing with a sister—I’m so grateful to have her here and her support, I couldn’t have done it without her,” Kenny, who now has only one less Olympic gold than her track cycling husband Jason, told the BBC.

With the Dutch world champions Amy Pieters and Kirsten Wild tangled in a horrible-looking crash, it became routine for Kenny and Archibald.

“I looked up and we had 60 laps to go and I thought I’ve not even touched the pedals!” Kenny said.

“I’ve never wanted to win a race so much in all my life and I messaged Jason and said I feel like my Olympics ends today, I love the team pursuit but I felt relief when it was over because this was the one race I wanted to win.”

The Dutch also have two golds so far but will earn another later when Harrie Lavreysen and Jeffrey Hoogland go head to head in the men’s individual sprint.