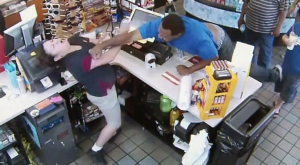 Kendrick Ruth, 35, was arrested after authorities say he was caught on camera punching a store clerk. (Lakewood Police Department)
US

Kendrick Ruth has been arrested after being caught on camera punching a store clerk in Lakewood, California, police say.

Ruth, 35, went into a gas station in early September and tried to purchase a Swisher Sweet cigar, which costs $1.41.

But he only offered the cashier a dollar bill. When she asked for the remainder of the money, he started to argue with her and tried to grab the cigar from her hand, reported KTLA.

She asked him to leave at that point, which is when he punched her. Ruth grabbed the cigar and left.

Ruth’s bail is set at $100,000 and he was scheduled to be arraigned on Friday at Bellflower Superior Court.

Yadira Lara, the 23-year-old cashier who was punched, said that she was hurt after the punch.

“I just blacked out for a while, just looking for my glasses,” Lara told NBC.

The punch aggravated a childhood injury in her left eye that could leave her blind.