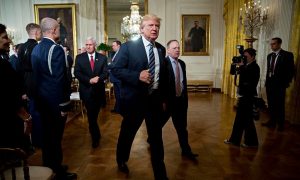 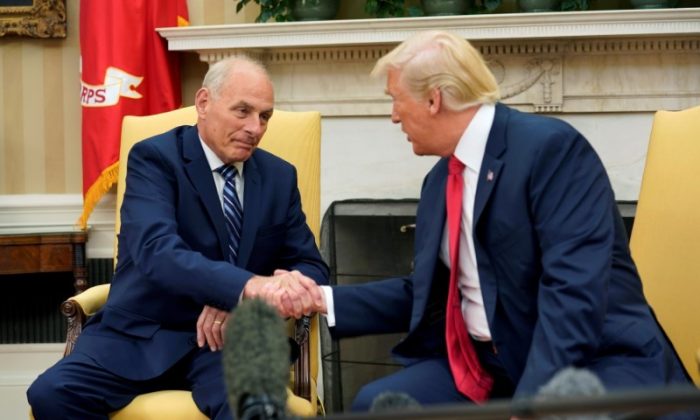 President Donald Trump shakes hands with John Kelly after he was sworn in as White House Chief of Staff in the Oval Office of the White House on July 31, 2017. (REUTERS/Joshua Roberts)
Politics

Kelly Sworn in as White House Chief of Staff

WASHINGTON—President Donald Trump swore in his new chief of staff John Kelly on Monday, a retired Marine Corps general who he praised for averting controversy during his tenure overseeing border security issues at the Department of Homeland Security.

Kelly is expected to bring a more disciplined approach to running Trump’s White House. He replaced Reince Priebus, who failed to mesh with the president’s unconventional management style and grappled with infighting during his six months in the job.

Trump praised Kelly for his work at the DHS, crediting him with reducing the number of people illegally crossing the southern U.S. border, and implementing a travel ban for refugees and people from a group of Muslim majority countries.

“He will do a spectacular job, I have no doubt, as chief of staff,” the Republican president said in brief remarks to reporters in the Oval Office, surrounded by his senior advisers, after Kelly was sworn in.

“With a very controversial situation, there’s been very little controversy, which is really amazing by itself,” Trump said.

Trump announced last Friday that Kelly would replace Priebus, at the end of a particularly chaotic week that saw his first legislative effort—healthcare reform—fail in Congress.

The last week heightened concerns in Trump’s party that the distractions and West Wing dysfunction would derail other legislative priorities, including tax reform and debt ceiling negotiations.

Trump pointed to the buoyant stock market and low unemployment rate as signs that his White House was working well. “No WH chaos!” he tweeted on Monday.

Asked by reporters what Kelly would do differently, Trump brushed aside concerns.