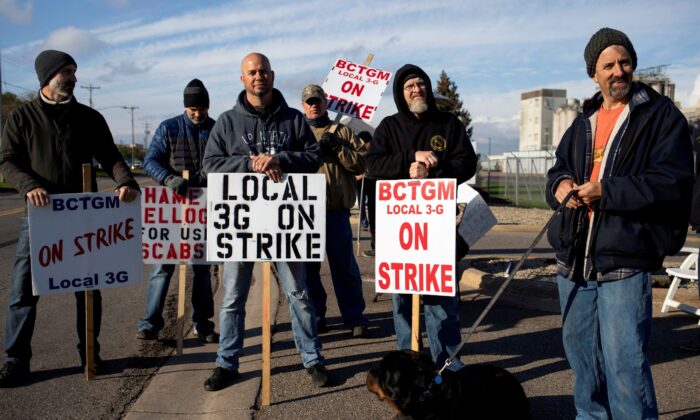 A group of union workers from Kellogg's picket outside the cereal maker's headquarters as they remain on strike in Battle Creek, Mich., on Oct. 21, 2021. (Emily Elconin/Reuters)
Companies

Kellogg Reaches Tentative Deal With Union After 2 Months of Strike

Kellogg Co. said on Thursday it has reached an agreement with the union on a new five-year contract for its employees at a few breakfast-cereal plants in the United States, potentially bringing a nearly two-month long strike to an end.

The tentative agreement, reached after multiple rounds of talks with the union, includes wage increases and benefits for all employees, and better terms for temporary employees.

The latest agreement allows for all temporary employees with four or more years of service to move to permanent positions with better pay and benefits.

Union members had previously opposed Kellogg’s two-tier employment system that did not offer temporary workers, who make up 30 percent of its workforce, a pathway to become permanent staff.

Employees at Kellogg’s cereal plants including Michigan, Nebraska, Pennsylvania, and Tennessee went on strike on Oct. 5 after their contracts expired, as negotiations over payment and benefits stalled due to differences between the company and about 1,400 union members.

The new deal, which will be voted on by Kellogg employees on Dec. 5, will also offer permanent employees with better post-retirement benefits.

During lengthy negotiations with union members, Kellogg had hired permanent replacements for some of its plant workers on strike, and also warned of a dent to its annual profit due to the disruption.

Kellogg is one of the several major U.S. companies that has faced worker strikes in the recent past as the labor market tightens and inflation reaches record highs.