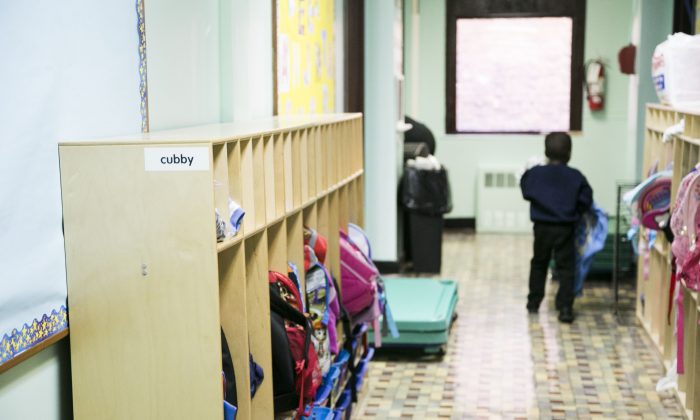 New security measures may create other dangers
By Amelia Pang

NEW YORK—At this century-old building in Queens where 4-year-olds go to prekindergarten, there are bulletproof walls, two sets of deadbolt locks on each classroom door, and a central surveillance system connected to the New York Police Department.

Such security equipment, installed with the intention to save lives in the event of a school shooting, seems to go unnoticed by the children as they begin their first month of school at St. Elizabeth Catholic Academy.

The security cameras—there are 39 of them—are small and tucked in corners. On the surface, the azure walls are the same azure walls from a year ago. But hidden behind the painted plaster, is a sheet of military certified ballistic steel that can halt 50 caliber bullets.

John Scotti, a 56-year-old philanthropist who works in building development, real estate, and insurance, partnered with the New York Police Department to design and implement these new school security measures.

Scotti and his wife, Sandya Shetty, 51, head a new privately funded nonprofit called Alert Inc., which aims to provide pro bono technology and equipment to better protect students and teachers across the nation from armed attackers.

“I was a little apprehensive at first,” said William Ferguson, the principal at St. Elizabeth’s. “I thought there was something involved. Nothing is ever free of cost. But this was.”

Scotti and Shetty paid roughly $150,000 for the installations, which were completed in two weeks. They said they plan on paying whatever amount it takes bring similar, customized security systems, such as bulletproof glass doors or windows, to 40 schools in New York City that have expressed interest so far.

Although it’s been nearly three years since the massacre in Sandy Hook Elementary School, where a mentally ill gunman killed six adults and 20 first-graders, it does not appear that Congress is likely to take on legislation regarding gun control or mental health care reform anytime soon.

Scotti and Shetty are among a growing number of individuals who have taken matters in their own hands to enhance school security systems. But sometimes, these efforts can create unintended complications and dangers.

According to the National Fire Protection Association (NFPA), deadbolt locks are prohibited from use in all occupancies except for residential homes and hotels.

“Having a single deadbolt lock is a violation of the NFPA codes in a school environment,” Robert Solomon, a fire protection engineer with the NFPA wrote in an email.

Alert Inc. argues that their double deadbolt locks are essential because they don’t require keys for one to lock from the inside.

During the Sandy Hook tragedy, the perpetrator was able to enter Lauren Rousseau’s classroom because she was a substitute teacher who did not have the keys to lock the classroom door. Rousseau and 15 of her students were killed.

“If we did this at Sandy Hook these kids would be alive today,” Scotti said.

Alert Inc. is not the only organization that is grappling with fire codes.

Schools have been purchasing various forms of classroom barricade devices since the Sandy Hook tragedy, and most violate fire codes.

In June, a law was passed in Ohio that made it illegal for the state fire code to ban the use of school barricade devices.

But Michele Gay, whose 7-year-old daughter was shot to death in Rousseau’s classroom at Sandy Hook, holds reservations about violating fire safety codes.

“I was struck by the passion behind the idea. I have to commend that,” Gay said. “But two sets of deadbolts is strictly against fire safety codes.”

In the grand scheme of things, school shootings are rare. Fires are a more common danger.

Around 4,060 fires occur every year in Pre-k–12 buildings, according to data from the NFPA. There were 40 school shootings in 2014.

It may not be wise to violate current fire safety standards that have kept students safe for decades. No one has died in a school fire in the United States in 56 years, according to the National Fire Academy.

Spending Money on Counselors and Psychologists

Scott Poland, a Nova Southeastern University professor who specializes in school crisis, feels that money would be better spent on hiring more school psychologists and counselors.

“Most of the time perpetrators talked to someone, or many people, about their plans,” Poland said.

Poland, who has served on the President’s Roundtable on Youth Violence and led response teams after 15 separate school shootings, recalled the tragedy that occurred in Red Lake, Minnesota in 2005, when a 16-year-old shot and killed seven people at his school.

“According to an FBI report, [the perpetrator] said something to as many as 36 students,” Poland said. “He communicated with eight students almost daily about his plans.”

In a report titled “Prior Knowledge of Potential School-Based Violence,” the U.S. Secret Service and the Department of Education found, after surveying 37 cases of school shootings, that there was almost always someone that knew about the plan. School shootings were rarely impulsive and they can be prevented.

That was the case with Charles Williams, a 15-year-old who used a revolver to wound 13 and kill 2 students at Santana High School in 2001.

Weeks before the shooting, Williams attempted to speak with a school counselor but was turned away because the counselor did not have enough time to see him.

“Saturday night, we were telling everybody. Josh was telling everybody because he thought it was cool. I was telling everybody, hoping in the back of my mind that an adult would find out about it (and stop it),” Williams went on to tell the San Diego Union-Tribune. “Probably about 50 people total, including a couple of adults, knew about it. I think a lot of them didn’t take it seriously.”

After the murders, Williams expressed deep remorse for his actions. He apologized and broke down in tears during his trial in 2002. Williams is currently serving life in prison with the possibility of parole after 50 years.

“The bottom line in my opinion, is that most school shootings should have been prevented,” Poland said.

But during a time when schools are facing budget cuts, it is not likely that more counselors and psychologists will be hired.

Not all are fond of that idea.

With all the talk about finding perpetrators before they act, Jun Sung Hong, an assistant professor at Wayne State University who researches school violence, worries that the act of singling out students who may potentially be dangerous from nondangerous students could in it of itself be harmful for a student’s mental health and well-being.

“Profiled students may not really be harmful to other students,” Hong said. “But because they’re profiled, they face the consequences.”

While there is no one perfect solution to prevent school shootings and deaths, Gay said it is important for people who want to make schools safer to work together.

After her daughter’s death, she saw that there was a lack of information and resources for individuals who wanted to take action to improve school security.

Gay founded Safe and Sound, a nonprofit that serves as a resource center for improving school safety and security, in hopes of creating a viable, comprehensive school safety code that can be adopted nationwide.

“We’re not banded together the way we need to be in order to provide the best form of safety,” Gay said. “That will be the changing moment, when we become organized.”