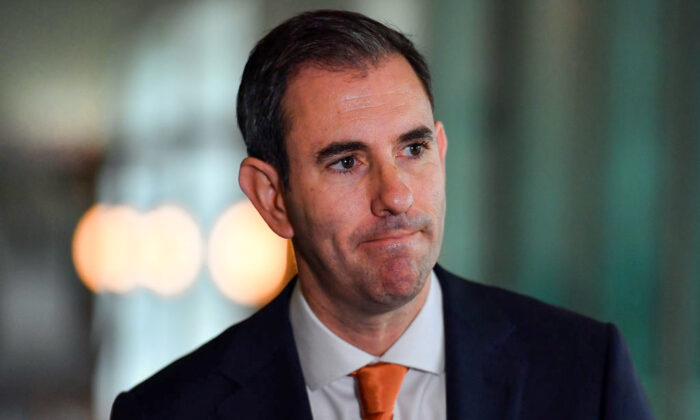 Shadow Treasurer Jim Chalmers during a doorstop at Parliament House in Canberra, Australia on May 11, 2021. (Sam Mooy/Getty Images)
Australia

Keen to Contest With Liberal on Economy: Labor

Labor is “confident and keen” to challenge the Coalition on its economic record ahead of the federal budget and election, shadow treasurer Jim Chalmers said.

In an address to the Australian Industry Group, Chalmers said it was Labor’s goal to build a stronger economy and society compared to before the emergence of the COVID-19 pandemic.

He said the election should be a “contest of ideas” rather than “unhinged scare campaigns” on tax, the Greens, or China.

The federal government has put Australia-China relations on the table for elections, calling into question Labor’s track record with the Chinese regime.

Chalmers said a Labor budget would build on five economic policies to lift the “speed limit” on recovery.

Labor has pledged free TAFE and university places to deal with skill shortages while also planning investment into clean energy to “create more jobs,” and modernising the NBN.

However, further detail about the policies has not been revealed to date.

“So our alternative approach to the budget is all about emphasising the quality of the spending, not just the quantity,” he said. “How much matters, how good matters more.”

“Making sure our investments are governed by economic imperatives and recognising you can improve the budget without hacking away at essential services like Medicare.”

Chalmers expected the national accounts for the December quarter to show a healthy GDP recovery prior to the Omicron outbreak and added the economy was already recovering from the brief setback.

Retail spending in January grew stronger than expected despite the initial fears around Omicron.

The Australian Bureau of Statistics (ABS) revealed it rose by 1.8 percent, adding to the post-Delta lockdown retail recovery as sales reached their second-highest level.

However, Chalmers warned that a lot of uncertainty remained domestically and internationally, including the conflict in Ukraine.

“The war in Ukraine is expected to push up energy and food prices and feed some serious market volatility and investor caution, with consequences for our region and for us here at home,” he said.

The emergence of inflation makes the judgement on interest rates more difficult for the Reserve Bank when they inevitably rise, Chalmers said.