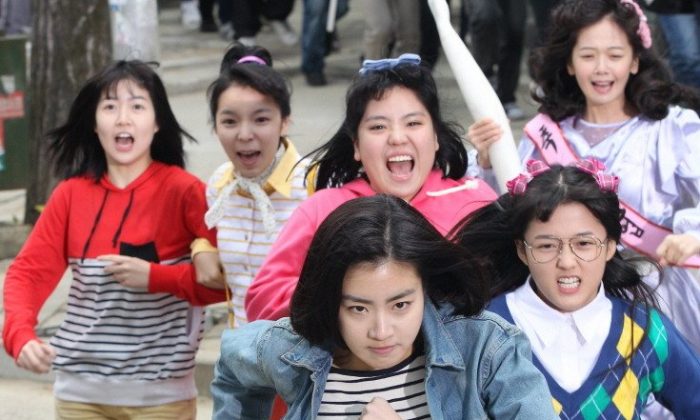 A scene from “Sunny,” a film about the incidents that happen when women search for their high school friends. (Courtesy of Han Cinema)
Entertainment

If Rizzo were dying of cancer, surely Frenchie would reunite the Pink Ladies. Such is the position that married and well-to-do Na-mi finds herself in. Some members of the girl gang are happy to get back together, but others are harder to find in Kang Hyeong-cheol’s monster hit Sunny.

While not exactly a life of quiet desperation, Na-mi leads a sheltered existence that is not wholly fulfilling. Since her husband and daughter are too busy to visit her mother-in-law in the hospital, she upholds their obligations. During one such visit, she chances across the room of Choon-hwa, the leader of the clique dubbed “Sunny.”

When Na-mi’s family moved to Seoul from the countryside, Choon-hwa took the shy teen under her wing. As we watch in flashbacks, most of Sunny quickly fell in line, but not Soo-ji, the moody prospective model.

When not rumbling with other girl gangs, Sunny practiced their choreography. However, they were never able to perform their big number, for reasons that will eventually be revealed. Hmm, anyone smell some unfinished business here?

In a Korean film, when a character is introduced with a fatal illness in the first act, it is a cinch that there will be an emotional funeral coming down the pike. This goes way beyond Chekhov’s gun. Without a big weepy payoff, audiences would want their money back. Not to be spoilery, but Sunny delivers the goods.

Yes, this is a chick flick, but it is an admittedly well-crafted film. Employing some surprisingly striking transitions for each temporal shift, Sunny is more visually stylish than it probably needed to be. In fact, Nam Na-yeoung won the best editing honors at Daejong Film Awards for good reason. As the narrative unfolds, it pulls you in, despite viewers’ macho or hipster resistances.

Although hardly a teen herself, singer Min Hyo-rin has her moments as the high school ice queen, Soo-ji. As for her adult counterpart, that is really the question driving the film’s third act.

If Cyndi Lauper floats your boat and you prefer Boney M’s version of the title song over Bobby Hebb’s original, then the film’s unabashedly 1980s soundtrack will be your catnip.

The ways screenwriter-director Kang interjects and darts around the May 1980 democracy protests also gives the film a bit of seasoning. He certainly conveys his point of view, without waving the bloody shirt. Sunny is shamelessly manipulative and sentimental, but it does exactly what it sets out to do.