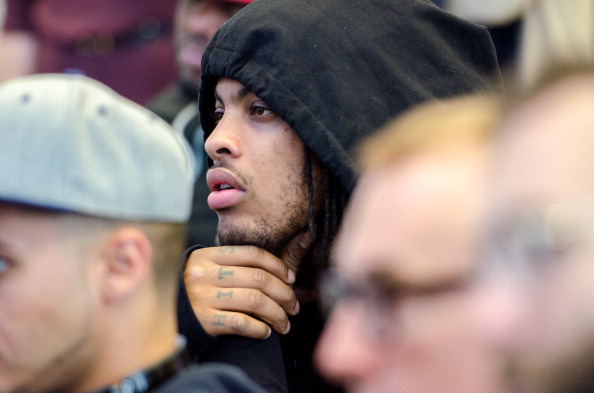 KayO died Dec. 29, 2013, after he committed suicide. He shot himself in the head amid launching his own rap career. “Make Sure You Go Vote & Download My Latest Mixtape Redd,” Redd last tweeted before he killed himself.

Waka on the show talked about his brother’s death, saying that he feels partially responsible and he looked still shaken up about the matter.

On Twitter, a number of people commented on the matter.

“Aww, that’s so sad. My condolences go out to Deb & Waka Flocka,” one person wrote on Twitter.

Added another, “Aww Waka Flocka and his mum, feel sorry for them.”

NEW BRUNSWICK, N.J. (AP) — A truck driver’s lack of sleep is being blamed for the highway crash that injured Tracy Morgan and killed another comedian in New Jersey.

As Morgan recovered in a hospital, authorities said Monday that the truck driver who triggered the weekend crash hadn’t slept for more than 24 hours before the accident.

Wal-Mart trucker Kevin Roper was expected to appear in state court Wednesday. It was unclear if Roper, of Jonesboro, Georgia, had retained an attorney. He remained free after posting $50,000 bond.

State police on Tuesday released audio recordings from three 911 calls made after the accident. In one, a woman tells the dispatcher: “It’s a terrible accident. The car flipped. It’s on its side. It’s two vehicles and a Wal-Mart truck.”

Authorities said Roper apparently failed to slow for traffic ahead early Saturday in Cranbury Township and then swerved to avoid a crash. Instead, they said, his big rig smashed into the back of Morgan’s chauffeured limo bus, killing Morgan’s close friend and fellow comedian James “Jimmy Mack” McNair and injuring Morgan and three other people.

Roper has been charged with death by auto and four counts of assault by auto. Under New Jersey law, a person can be charged with assault by auto if he or she causes injury after knowingly operating a vehicle after being awake for more than 24 hours.

According to the criminal complaint, Roper operated the truck “without having slept for a period in excess of 24 hours resulting in a motor vehicle accident.” It doesn’t specify the basis for that assertion.

The accident occurred in a chronically congested area of the New Jersey Turnpike where a five-year widening project is expected to be finished this year. A turnpike authority spokesman said two of three northbound lanes had been closed about a mile ahead of the accident for road work, which likely slowed traffic.

Morgan, a former “Saturday Night Live” and “30 Rock” cast member, was in critical but stable condition Monday. His spokesman, Lewis Kay, said he faces an “arduous” recovery after surgery on his broken leg.

Morgan suffered a broken femur, a broken nose and several broken ribs and is expected to remain hospitalized for weeks, Kay said. Morgan’s fiancee was with him at the hospital, he said.

Wal-Mart trucks have been involved in 380 crashes in the past two years, federal data show. The crashes have caused nine deaths and 129 injuries. The company has 6,200 trucks and 7,200 drivers, according to the Federal Motor Carrier Safety Administration, and they drove 667 million miles last year.

Roper’s truck was equipped with a system designed to slow its speed and notify him of stopped traffic ahead, a company spokeswoman said. It’s unknown if the system was working.

The National Transportation Safety Board is working with state police to look at any issues in the crash related to commercial trucking and limousine safety.

Federal regulations permit truck drivers to work up to 14 hours a day, with a maximum of 11 hours behind the wheel. Drivers must have at least 10 hours off between work shifts to sleep.

Wal-Mart said it believed Roper was operating within federal regulations.

“Safety is the absolute highest priority for Walmart,” it said in an emailed statement.

Safety advocates said they hope the accident will help their case.

“This is part of a systemic problem of having tired people driving at night and driving large trucks,” said Henry Jasny, vice president of Advocates for Highway and Auto Safety.

But Dave Osiecki, vice president of the American Trucking Association, said no regulations can prevent a driver from making “bad choices.”

Morgan, a New York City native, was returning from a standup performance at Dover Downs Hotel & Casino in Delaware when the crash occurred. Six vehicles were involved in the pileup, but no one from the other cars was injured.