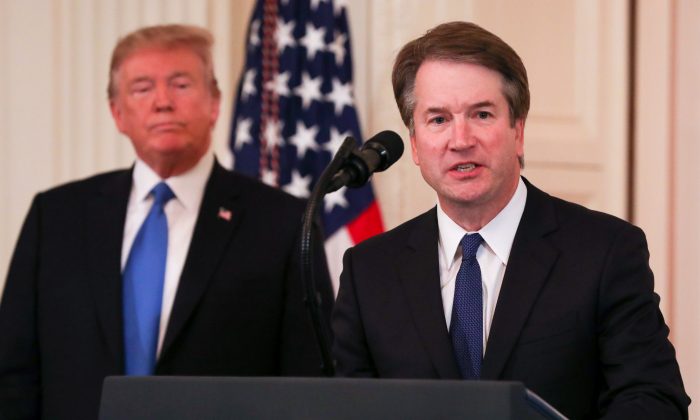 President Donald Trump announces Judge Brett M. Kavanaugh as his nominee for Associate Justice of the Supreme Court of the United States in the East Room of the White House in Washington on July 9, 2018. (Samira Bouaou/The Epoch Times)
Trump Administration

Eighty of Judge Brett Kavanaugh’s former law students sent a letter to the Senate on July 19 in support of Kavanaugh’s nomination to the Supreme Court.

President Donald Trump nominated Kavanaugh on July 9 to replace retiring Supreme Court Justice Anthony Kennedy. Kavanaugh faces a series of confirmation hearings in the Senate, where Republicans hold a slim majority. Before that, his meeting with scores of senators in a bid to build support for his confirmation.

“Judge Kavanaugh is a rigorous thinker, a devoted teacher, and a gracious person,” wrote the students from classes ranging from 2009 to 2018. “Judge Kavanaugh was an inspiring professor and impressive intellect. His thoughtful explanations and analyses spoke to the breadth of his legal knowledge. He was also engaging and fair-minded.”

In addition to teaching law, Kavanaugh has been a judge of the U.S. Court of Appeals for the District of Columbia Circuit since 2006. Trump picked Kavanaugh from a list of conservative justices curated by the Federalist Society and the Heritage Foundation.

“During classroom discussions, he displayed a keen interest in exploring all sides of a question,” the students’ letter states. “Judge Kavanaugh invited robust discussions and consistently encouraged his students to voice different viewpoints—even if others (or the judge himself) might disagree.”

Republicans hold a 50-49 majority in the Senate, with one lawmaker on sick leave. At least four Democrats from states won by Trump in 2016 are considered swing votes. Three of the four voted for Trump’s prior nominee, Justice Neil Gorsuch, last year. The fourth swing vote, Sen. Doug Jones (D-Ala.), began his term in the Senate via special election after Gorsuch was confirmed.

“In many instances, [Kavanaugh] has continued to provide advice and support long after the class ended by writing letters of recommendation and serving as a valued mentor,” the students’ letter states. “In our view, his genuine interest in helping young lawyers demonstrates a deep commitment to the legal community as a whole.”