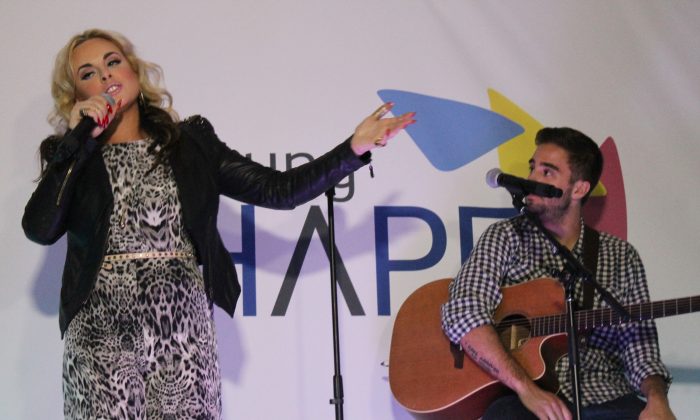 Rising Pop Artist Katy Tiz stopped by New York City Wednesday night to perform an acoustic set as part of Samsung’s “Shape Summer Mix Series.” The series allows the listener to get to know the artist at a intimate level as tracks that influenced them play on Samsung’s Shape Wireless Audio-Multiroom System.

Before performing, Andrew Hammp of Billboard spoke with Tiz on her upcoming debut album and her breakthrough hit, “The Big Bang,” originally recorded by Rock Mafia and heard excessively onVH1’s Mob Wives.

According to Tiz, the album will primarily consist of pop music along with two ballads that highlight her vocals. “I’ve become more comfortable vocally,” she said. “I want to show off my voice and be known as a vocalist.”

Tiz’s cover of “The Big Bang” has been rising on Billboard, currently sitting on number 26 on its pop charts. Her set may have been short but she has proven that  she is accustomed to the spotlight. She performed “The Big Bang” and “I Don’t Give A,” a track off her upcoming debut album that’s catchy and its lyrics are edgier than anything Taylor Swift can write about relationships and rejection. If you can sing about being essentially “friend-zoned,” there is hope that everyone can relate  and fall in love with you.

Although she was calm and collected during the event, Tiz admitted to getting shy when running into other artists. Tiz recalls going crazy over meeting Justin Timberlake and being too nervous to ask Jennifer Lopez to take a selfie, to which Hammp responded, “It’s Jenny from the block.”

Samsung “Shape Summer Mix Series” will conclude on July 31 with an acoustic performance from Oh Honey.