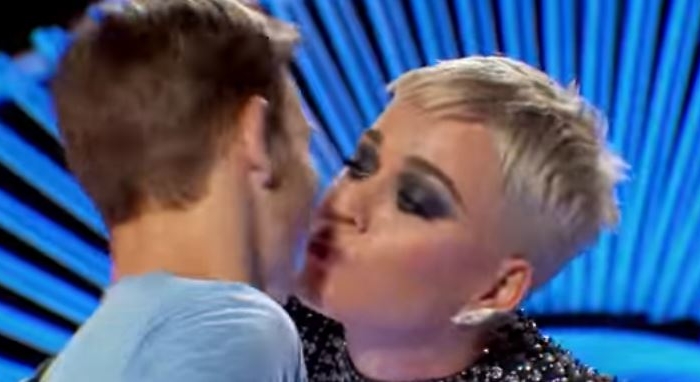 Katy Perry Under Fire Over Unwanted Kiss on ‘Idol’

Pop star Katy Perry shocked the audience of “American Idol” when she kissed a contestant.

Benjamin Glaze, 19, was waiting to audition for his big shot when he was kissed on the lips by Perry, a judge on the show.

Glaze, a cashier from Enid, Oklahoma told the New York Times that he’d never been kissed before.

”I was a tad bit uncomfortable,” Glaze said. “I wanted to save it for my first relationship,” he added about his first kiss. “I wanted it to be special.”

Glaze said he’s aware some men would enjoy the chance to kiss the popular singer but he didn’t.

“Would I have done it if she said, ‘Would you kiss me?’ No, I would have said no,” he said. “I know a lot of guys would be like, ‘Heck yeah!’ But for me, I was raised in a conservative family and I was uncomfortable immediately. I wanted my first kiss to be special.”

The scene was played during the premiere of “Idol,” which just switched from Fox to ABC.

Perry is featured on the new judging panel along with Lionel Richie and Luke Bryan.

Glaze is shown in the segments waiting with his guitar to perform, then entering the studio.

Glaze said he enjoys his work as a cashier because it lets him meet “cute girls.” Bryan asked if he’d ever kissed a girl.

Perry stood up and motioned Glaze over and stuck her face toward him. Glaze kissed her on the cheek, but she asked for another kiss. As he went to kiss her other cheek, she kissed him on the lips.

“Katy!” Glaze yelled as he stumbled backward. “You didn’t!” Glaze asked for a drink of water before delivering his audition. The judges rejected him.

The audition took place in October.

Glaze said that he spoke with friends since then about the kiss and they agreed that it wasn’t a big deal.

He kissed @katyperry and he liked it. ??? #AmericanIdol

“They agreed with me that it didn’t really count,” he said. “It was lip contact versus a romantic situation with someone you care about. That’s what a real first kiss is.”

Some viewers were horrified about what happened, in light of the #MeToo movement that has led to a string of accusations of sexual harassment and abuse by people against others, mostly women against men.

“It was a forced sexual act,” one Twitter user said. “Imagine if this was from a male judge. Has @katyperry not taken anything from the #metoo movement?”

“If a male judge kissed a girl like that, IMAGINE the rioting. Double standard against men,” added another.

Another user thought that the kiss may have disrespected Glaze’s religious convictions.