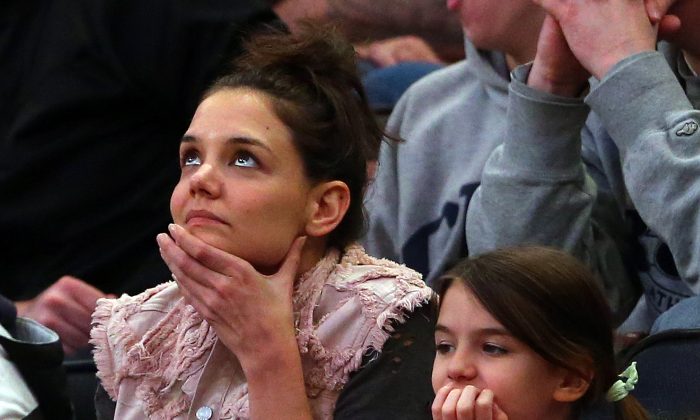 Actress Katie Holmes and her daughter Suri Cruise attend the East Regional Final of the 2014 NCAA Men's Basketball Tournament between the Connecticut Huskies and the Michigan State Spartans at Madison Square Garden on March 30, 2014 in New York City. (Photo by Elsa/Getty Images)
Entertainment

A new report claims that Suri Cruise is homesick for New York City after moving to Los Angeles but mother Katie Holmes says that the report isn’t true.

“Suri has always hated the cameras constantly in her face, and the paparazzi are far more intense in L.A.,” a source told the tabloid.

“She’s a tough cookie, but she’s not loving it right now.”

The magazine titled the story: “East Coast kiddie Suri Cruise is reportedly not adapting well to life outside the Big Apple!”

On the other hand, a representative for Holmes told Gossip Cop that Suri is “very happy and enjoying being back in California.”

“It’s true that Suri hates paparazzi attention. But she was constantly pursued by photographers in New York, too, and even had a couple of very unpleasant incidents there. One paparazzo in New York actually called her a [expletive],” the blog added.

” Los Angeles has not been ruined for her just because Suri, like anyone else pursued by the paparazzi, is tired of the harassment.”