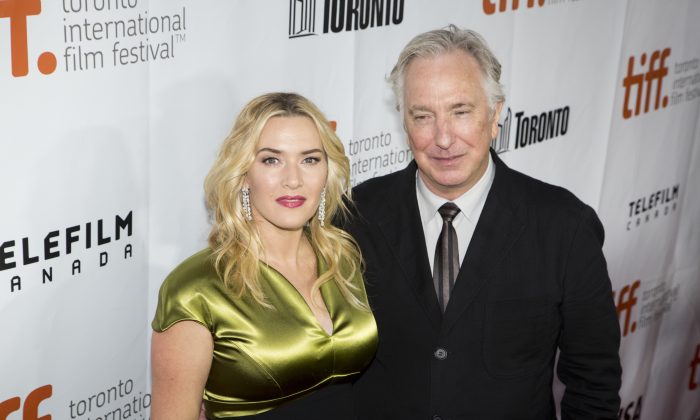 Kate Winslet and Alan Rickman attend the red carpet premiere of "A Little Chaos", Sept. 13, 2014, in which she plays a revolutionary garden designer in the court of Louis XIV, who is played by Rickman. (Evan Ning/Epoch Times)
Entertainment

TORONTO—It was hard to tell at times if fans were shouting “Kate” or “Snape” at the red carpet premiere of “A Little Chaos” Saturday night at the Toronto International Film Festival.

The period drama, set in the court of Louis XIV, was directed by Alan Rickman of Harry Potter fame and stars Kate Winslet (“Titanic,” “Divergent”) who is commissioned to construct the King’s garden at Versailles.

The film is getting positive reviews and was given the honour of closing out TIFF. It’s Rickman’s second time as director and he said that it was a vastly different experience from his first film, “The Winter’s Guest.”

“The last one was set in the freezing wastes of Scotland … and this one is set at the court of Louis 14 at the Court of Versailles,” he said.

That setting was an opportunity to indulge in the rich architecture and fashion of the era, said Winslet, who was thrilled to play a British character and wear the sumptuous costumes of the time.

Rickman, who stars as King Louis XIV in the film, joked about playing the dual roles of director and actor.

“It is a very stupid thing to try to do, but some people manage it,” he said.

The movie tells the story of Sabine de Barra, (Winslet) a willful and revolutionary gardener with a chaotic flare to her work. She’s hired by the King’s chief landscape architect André Le Notre (Matthias Schoenaerts), who is known for his sense of symmetry and scale. The two clash but also fall in love, all while a jealous, cheating wife plots revenge.

For Winslet, it was both a pleasure and a relief to let her British accent shine through.

“It was a thrill for me to play a British person again, which I haven’t done for a really long time,” she said.

Winslet’s character as an assertive woman making her mark in a man’s world is entirely fictional. It was a role the actress said she enjoyed.

“It was really wonderful to play a woman that is so strong within herself and her identity is so deeply embedded in what she does and in these gorgeous gardens that she creates.”