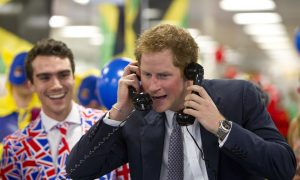 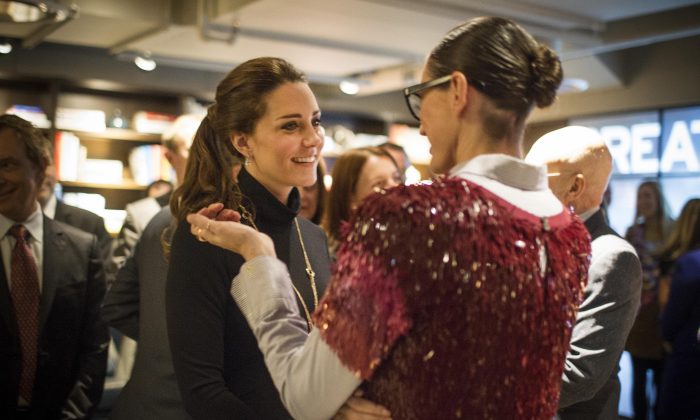 Kate, Duchess of Cambridge, speaks to Jenna Lyons at the Creativity is GREAT at NeueHouse on Tuesday, Dec. 9, 2014 in New York. Prince William and Kate are on the last of their 3-day tour of New York City, their first visit to the United States since a trip to California in 2011. (AP Photo/ Christopher Wahl, Pool)
Entertainment

Kate Middleton Freaked Out Over Meeting a Woman in New York, But It Wasn’t Beyonce

Kate Middleton was calm and collected while meeting pop superstar Beyonce and esteemed official Hillary Clinton while in New York City, but did get very excited to meet another woman.

That would be Jenna Lyons, the creative director of label J. Crew.

Pictures showed the pair chatting and laughing like long-lost friends, with Kate easily showing the most emotion of any of her recorded encounters.

The royal couple just finished a three-day trip to the United States, which included a basketball game at which Kate wore a pair of J. Crew jeans.

Kate and Prince William arrived at the Creativity is GREAT reception during their tour of the city at the workspace NeueHouse, when she encountered Lyons.

While Kate was visibly excited to meet Lyons, the designer was elated as well.

“My father’s British so I grew up going to England every summer and sometimes for Christmas,” she said, reported Vanity Fair. “I will say, it feels very powerful [meeting Kate]. I can imagine for her, she’s just a normal person—but it doesn’t feel like that to me. She’s, in essence, a true version of a princess. She’s lovely, gracious. It was incredibly exciting.”

Lyons was then asked if Kate had ever worn J. Crew before.

“Believe it or not, I was told she wore J. Crew jeans last night to the game,” she said. “I was so excited. You couldn’t tell, but that’s okay. At least I know that fact.”